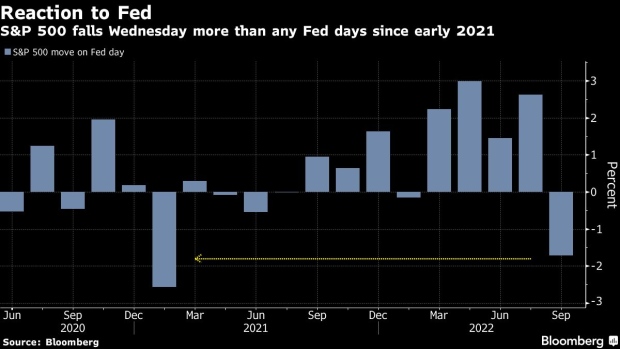 The Marriner S. Eccles Federal Reserve building in Washington, D.C., US, on Wednesday, July 6, 2022. The Federal Reserve will unveil details of what policy makers debated last month that may shed light on how they view the near-term path for interest rates amid surging inflation and signs of a slowing economy. , Bloomberg

(Bloomberg) -- It took longer than it should, but stock traders finally heeded the Federal Reserve’s latest message: The inflation battle will cause real economic pain.

After rising as much as 1.3% when the Fed delivered its third straight 75-basis point hike, the S&P 500 plunged into the close as Jerome Powell made it crystal clear that the central bank is going to keep raising rates sharply -- until officials see signs that price pressures are easing. That’s a process that won’t be “painless” for the labor and housing markets, the Fed chief warned.

The rate hike came with projections that the world’s most important monetary authority has another 1.25 percentage points of tightening in store for investors this year -- a far more aggressive pace than investors expected.

The cross-asset havoc was widespread. The equity benchmark finished 1.7% lower in its worst Fed day showing since January 2021, closing more than 20% below its January record. Two-year Treasury yields surged past 4%, a level not seen since 2007, while longer-dated bonds advanced on rising bets that a recession is in the offing.

The two-year yield continued pushing higher in the Asian trading session while the dollar climbed and stock gauges sank from Hong Kong to Tokyo and Seoul.

“Powell is saying the world will slow down and the Fed is going to do their best to make it happen sooner rather than later,” said Victoria Greene of G Squared Private Wealth.

Investors will now have to grapple with the threat of a Fed hiking to levels higher than previously expected in order to pin real interest rates above zero -- something Powell signaled was a prerequisite for an end to rate increases. At the same time, would-be dip buyers may take solace in the idea that that the Fed is administering the stiffest medicine of this cycle sooner than expected and could begin to ease up some time next year. That may help explain the turbulence in the market after the 2 p.m. decision as the S&P 500 veered between gains and losses.

“It seems like the market is wrestling with the possibility of higher rates at year-end on the one hand, and possibly getting the bulk of the rate hike cycle done sooner on the other hand,” Sameer Samana, Wells Fargo Investment Institute senior global market strategist. Against that backdrop, it’s “not surprising to see the Nasdaq/growth sell off hardest as they will face the stiffest valuation re-pricing headwinds.”

The wild trading Wednesday was yet another frenetic session in a year marked by violent swings, particularly around central bank decisions. The rout snapped a streak of three straight meetings that led to stock rallies even after outsize hikes. Each of those was violently undone shortly thereafter as Fed officials made clear asset prices needed to decline. That realization hit faster Wednesday.

Policy makers unveiled fresh projections that rates would reach 4.4% by the end of this year and 4.6% in 2023, a more hawkish shift in the so-called dot plot than anticipated. Beyond that, rates were seen stepping down to 3.9% in 2024 and 2.9% in 2025, their projections showed.

The updated forecasts suggest that the Fed is aiming for a “sharper, shorter” cycle that will ultimately slow economic growth in exchange for cooling inflation, according to Kathy Jones of Charles Schwab. That’s a recipe for an even more deeply inverted yield curve as investors flock to longer-dated Treasuries, while riskier corners of the market will falter.

“It should be negative for risk assets in general,” said Jones, the firm’s chief fixed-income strategist. “We’ve been looking for credit spreads to widen, but as we get closer to the economic impact of rate hikes, that’s probably when we’ll see spreads widen out, particularly high-yield.”