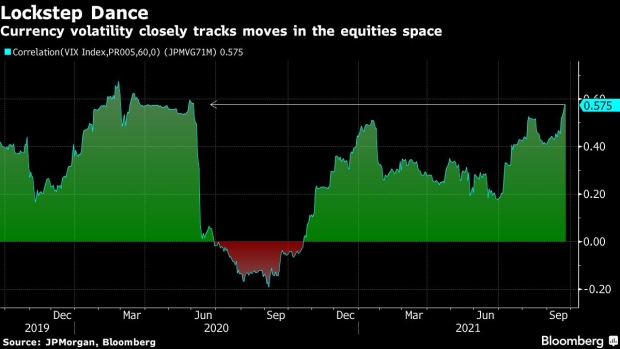 (Bloomberg) -- Volatility in U.S. stocks and major developed currencies is swinging in lockstep by the most in more than a year, as risks from China compete with central banks to drive market moves.

The Cboe Volatility Index, or the VIX, -- a measure of expected swings in U.S. stocks -- climbed this week to the highest in nearly four months. A JPMorgan gauge of one-month implied volatility in Group-of-Seven currencies touched a seven-week high. While both measures have since receded from those peaks, their relationship is the strongest since June 2020.

This comes during a week when the Federal Reserve and at least 14 other central banks delivered rate decisions and guidance on the next path of monetary policy. While stocks and currencies were unfazed by some U.S. policy makers’ outlook for rate increases as soon as next year, they were whipsawed by headlines that ranged from China Evergrande Group’s debt crisis to a crackdown on crypto transactions by the People’s Bank of China.

“There may well be a few more twists and turns on Evergrande, and I’m also surprised that risk assets didn’t correct more on the hawkish Fed dots this week,” said Chris Turner, head of foreign exchange strategy at ING Bank NV. “Volatility can stay supported.”

All Group-of-10 currencies fell on Friday as the Bloomberg Dollar Spot Index rose 0.3%, nearly erasing declines seen in the aftermath of the Fed meeting.

The U.S. central bank said on Wednesday that it could start winding down bond purchases “soon” and could end around mid-2022. Updated quarterly projections also showed officials are now evenly split on whether or not it will be appropriate to begin raising the federal funds rate as soon as next year.

The S&P 500 climbed 1.2% the following day, yet opened little changed on Friday after China banned all crypto transactions and vowed to stop illegal crypto mining. The move rattled investors who were already fretting over contagion risks from distressed developer Evergrande.

Most G-10 currencies have fallen against the dollar in September. And the S&P 500 -- though near a record high -- is set for its first monthly decline since January. Yet, while stock and currency volatility picked up this week, they are far from crisis-era levels. The VIX and JPMorgan’s gauge both stand below year-to-date averages.

The limited negative fallout for global equity markets has helped dampen spillover into currencies, according to Lee Hardman, forex strategist at MUFG Bank. “We would need to see sharper correction lower in global equities to trigger more volatility in the FX market,” he said.