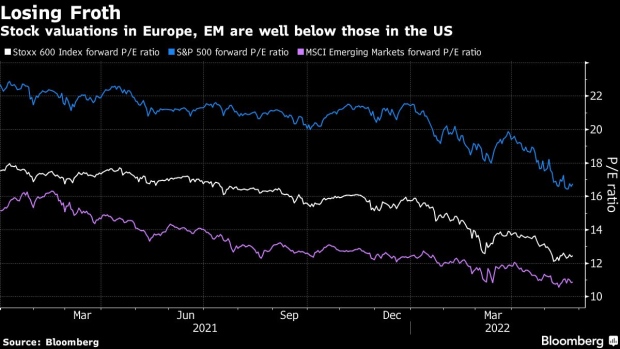 Traders on the floor of the New York Stock Exchange (NYSE) in New York, U.S., on Friday, April 29, 2022. Technology stocks extended losses Friday as shares of what were once market darlings at the height of the pandemic headed for their worst monthly drop since the great financial crisis. Photographer: Michael Nagle/Bloomberg , Bloomberg

(Bloomberg) -- Global equity funds saw their biggest inflows in 10 weeks, led by US stocks, as cheaper valuations lured buyers after a steep selloff on recession fears.

Investors added about $20 billion to global stocks in the week to May 25, led by inflows into the US, according to Bank of America Corp.’s note citing EPFR Global data. Cash led the inflows among asset classes with about $28 billion, signaling market participants continue to search for havens. Bond fund outflows reached $5.8 billion.

Equities have staged a recovery this week, with the US and European indexes heading for their biggest weekly advance since mid-March as investors bought the dip after strong declines. Citigroup Inc. strategists this week recommended stepping back into stocks, particularly in Europe and emerging markets, on their appealing valuations, while cutting their recommendation on US stocks to neutral,

Still, strategists remain divided on whether the selloff has found a bottom, with the likes of Morgan Stanley and Bank of America saying that there may be more losses to come, while BlackRock cut developed market stocks to neutral this week.

“Summer rally bandwagon is growing,” Bank of America strategists led by Michael Hartnett wrote in the note. “We fade rallies, but not in a rush.”

Assets including US 30-year Treasuries, Chinese and German stocks, US banks and technology, European industrials as well as consumer stocks in the US, Europe and China are among the most oversold assets relative to their 200-day moving average and “vulnerable to tradable bounce,” the strategists said.