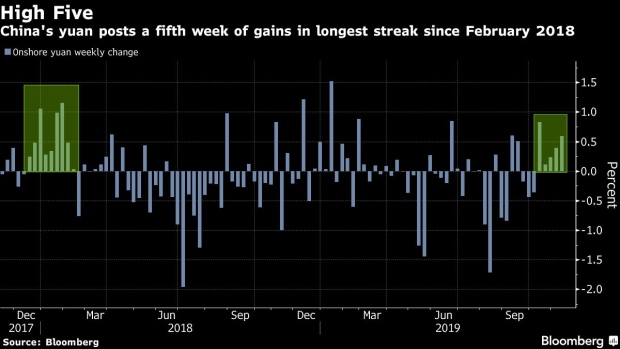 An investor stands at a trading terminal in front of an electronic stock board at a securities brokerage in Shanghai, China, on Friday, June 9, 2017. The Shanghai Composite Index rose 0.1 percent to extend a weekly gain to 1.5 percent. Photographer: Qilai Shen/Bloomberg , Bloomberg

(Bloomberg) -- Stocks in Asia looked set for a mixed start as investors parsed the latest developments in the trade conflict and kept an eye on Alibaba’s Singles’ Day for a gauge of consumer health in China.

Equity futures rose in Japan and Australia, while contracts dipped in Hong Kong. The S&P 500 eked out another record high on Friday, as Treasuries continued to sink -- the 10-year yield ended the week at 1.94%. The U.S. Veterans Day on Monday means no Treasuries trading. U.S. President Donald Trump said trade talks with China are moving along “very nicely” and that Beijing wants a trade deal “much more than I do.” The offshore yuan was steady after five weeks of gains.

Data over the weekend showed Chinese factories are threatening to drag down prices around the world as producer prices dropped for a fourth month in October. Alibaba’s sales event kicked off with a bang, with 136 billion yuan ($19 billion) of purchases in less than five hours. The world’s biggest shopping event could help investors gauge how willing Chinese consumers are to spend as economic growth threatens to slip below 6% and the trade war drags on.

An easing of global growth worries and signs of progress toward an interim trade deal have helped lift risk assets, with global equities rising for the past five weeks. But further short-term volatility should be expected, according to Shane Oliver, head of investment strategy at AMP Capital Investors Ltd.

“Equity valuations are OK, particularly against low bond yields, and global growth indicators are expected to improve by next year and monetary and fiscal policy are becoming more supportive,” he said. “All of which should support decent gains for share markets on a 6-12 month horizon.”

In Spain, voters went to the ballot box Sunday for the second time this year as the country strives to break a political logjam. The first poll after voting closed points to Prime Minister Pedro Sanchez’s Socialists falling short of an outright majority and the far-right Vox party gaining seats.

Saudi Aramco will allow investors to start bidding for shares starting on Nov. 17. The firm said it’ll provide the number and percentage of shares sold at a later stage, with book-building kicking off this week.

The U.K.’s sovereign credit rating was placed on negative outlook by Moody’s Investors Service, which said the country’s ability to set policy has weakened in the Brexit era along with its commitment to fiscal discipline.

To contact the editors responsible for this story: Christopher Anstey at canstey@bloomberg.net, James Ludden