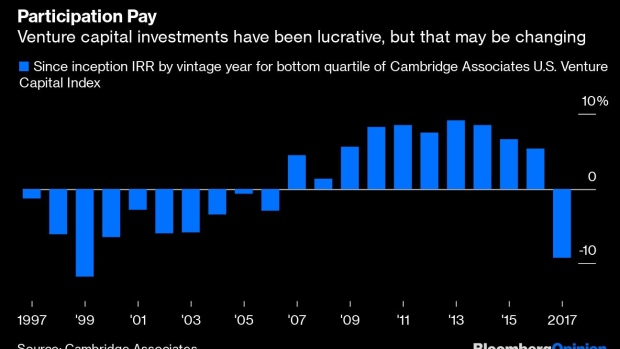 (Bloomberg Opinion) -- I’ve always thought someone should write a book titled “All I Really Need to Know About Stock Investing I Learned in the First Year of B-School” or something like it. The gist would be that investors should look for companies that:

Granted, that could just as easily be scribbled on a cocktail napkin, but the point of the book wouldn’t be to catalog the nuances of equity investing — investors already have Benjamin Graham and David Dodd’s terrific tome “Security Analysis” for that — but to have a handy reminder on the bookshelf of how to get the crucial parts right.

I’d like to think such a book would have saved Masayoshi Son, the chief executive officer of SoftBank Group Corp., some heartache. SoftBank reported a staggering $6.5 billion quarterly loss last week, resulting from Son’s sour investments in WeWork, Uber Technologies Inc. and other once-highflying startups. In comments accompanying SoftBank’s results, Son acknowledged that, “There was a problem with my own judgment, that’s something I have to reflect on.”

One problem, according to Son, is he overlooked that startups need solid governance and a path to profits. The book would have covered that, and neither WeWork nor Uber would have credibly checked those boxes. And don’t forget about price. It’s not easy to make money when paying a fortune for companies, as Son routinely does, no matter how good their governance or path to profits.

None of that mattered in recent years because investors eagerly paid ever-higher prices for startups. The frenzy has no doubt contributed to Son’s confidence, on display again last week, that he has a knack for venture investing. It’s true that SoftBank’s stock outpaced the Cambridge Associates U.S. Venture Capital Index by 3.1 percentage points a year through March, including dividends, since SoftBank embarked on its recent spree of acquisitions in 2010, and by 2.7 percentage points a year since it launched the Vision Fund in 2017, which houses its stakes in WeWork, Uber and roughly 70 other startups.

If SoftBank got a boost from Son’s venture bets, it’s almost certainly not alone. Consider that the net internal rate of return of the bottom quartile of the Venture Capital Index was negative every year from 1997 to 2006, with an average IRR of negative 4.8% during the period. The following decade was just the opposite. The bottom quartile posted a positive IRR every year from 2007 to 2016, with an average of 6.5%. In other words, venture investors have been paid for just showing up in recent years.

Investors’ loose standards have also spilled into public markets, as I recently pointed out. Glamour stocks, or companies with big expectations and pricey shares, but little or no profit, outpaced shares of the cheapest and most profitable companies by 12.5 percentage points a year over the last five years through September, according to numbers compiled by Dartmouth professor Ken French.

The appeal is obvious. Investors love to think they can spot the next big thing, never mind profits, governance or price. Amazon.com Inc. is cited frequently as an example. It generated little or no profit during its first two decades. It’s been tightly controlled by founder Jeff Bezos, a king in all but name. Its price-to-earnings ratio has averaged — wait for it — 227 times since 2002, based on monthly observations. And yet a $10,000 investment in the company when it went public in 1997 would now be worth roughly $11.8 million.

But Amazon is the vast exception, of course. As University of Chicago professor Eugene Fama told my Bloomberg Opinion colleague Barry Ritholtz in an interview last week, if you have 100,000 people picking stocks, “one of them will look extraordinary purely on a chance basis.” The same can be said for stocks themselves.

There are signs investors are ready to give the dice a rest. Son’s newfound appreciation for profits appears to be more widely shared. Goldman Sachs Group Inc. CEO David Solomon told Bloomberg TV recently that, “there’s got to be a clear and articulated path to profitability” and that he thinks “there’s a little more market discipline coming into play.”

Seeing red tends to sober up investors. Glamour stocks are down 9.1% over the last year through September, even as the S&P 500 has returned 4.3%. And that bottom quartile of venture funds posted a negative IRR of 9.2% in 2017, the most recent year for which numbers are available.

At some point, the growth-at-all-cost fad will end, if it hasn’t already. But it never disappears, which is why everyone could use a reminder that profits, governance and price never go out of style.

To contact the author of this story: Nir Kaissar at nkaissar1@bloomberg.net