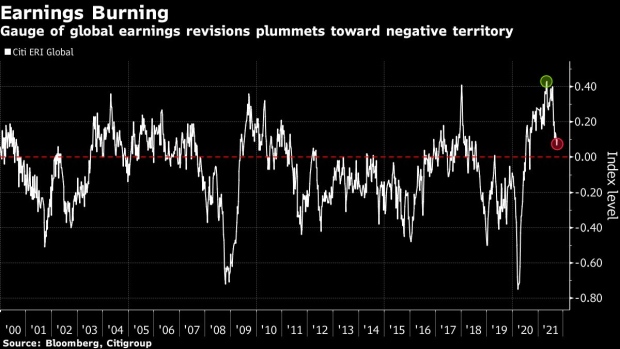 Container ship Ever Govern, operated by Evergreen Marine Corp., sails cargo into the Port of Hamburg in Hamburg, Germany, on Tuesday, Jan. 12, 2021. Germany’s economy is limping into 2021 heavily bruised by the pandemic, deeply reliant on government aid -- and in better shape than most of the euro zone. Photographer: Dominik Reipka/Bloomberg , Bloomberg

Few expect the supply snarls to end this year as an energy crisis stokes inflation fears. Caution abounds in the semiconductor, retail and raw material space.

“The supply-chain problems are going to stay, leading to substantially higher prices, and major dislocations in parts of markets no one is expecting,” said George Ball, chairman of Houston-based investment firm Sanders Morris Harris. “Almost all segments of the economy that are not pure service or pure technology driven will be struggling with supply-chain issues for a long time.”

The Many Reasons Why Global Supply Chains Have Become So Snarled

Here are some challenges and opportunities identified by investors for key sectors ahead of the earnings season:

For the semiconductor industry, expectations are for more capacity to only trickle in by the latter part of 2022 due to factory closures and longer delivery times. A power crunch in China could also worsen the situation as it shuts down factories.

However, with hubs such as Malaysia reopening, the pricing power of some companies could weaken particularly at a time material costs such as silicon are soaring.

Prices for DRAM and NAND chips already appear to be peaking, and 12-month forward earnings estimates for chipmaking giants Samsung Electronics Ltd., Micron Technology Inc. and Intel Corp. have fluctuated or fallen in the past two months. Shares are down around 20% or more from recent peaks.

“Even though many of them have had revenues surge to all-time records, the stocks have not followed suit,” said Susquehanna analyst Christopher Rolland. “That tells me that at this point some of this consternation is baked into shares more broadly.”

The World Is Short of Computer Chips. Here’s Why: QuickTake

Chip shortages are also behind the estimated $210 billion in lost sales for carmakers this year. Many have reported a slump in revenues in the third quarter, worsened by shipping logjams and port congestion. However, with the industry’s troubles well documented, some analysts see most of the downside already priced in.

“We see 3Q as likely being the trough in terms of auto production” in the U.S. although there could be multiple guidance cuts by suppliers, Morgan Stanley analysts including Adam Jonas wrote Wednesday. “But production cuts seem well telegraphed, so don’t be surprised to see investors buy the 3Q chip dip.”

The MSCI AC World Automobiles & Components Index has been climbing toward a seven-month relative high against the broader market since late August.

Carmakers such as Tesla Inc. and Toyota Motor Corp. appear to be handling the shortages better than others, with the Japanese carmaker reporting a 1.4% increase in sales in the latest quarter.

The Wait for Semiconductors Turns Ominous for Automakers

A 65% plunge in bellwether Bed Bath & Beyond Inc. shares since early June exemplifies the problems facing retailers globally, with multiple choke points in their supply chains just as they need to stock up for the most important time of the year. A gauge of the sector is trailing the broader market by more than seven percentage points this half, as companies cut forecasts for sales and profitability.

The challenges will “modestly” impact margins for the third quarter and have a more significant effect in the next, which captures the holiday season, said Telsey Advisory Group analyst Cristina Fernandez.

Making matters worse are factory closures. Nike Inc. lowered its sales forecast in late September due to shutdowns in Vietnam, where tens of thousands of workers are now leaving the factory heartland. Deckers Outdoor Corp., Skechers U.S.A. Inc., Adidas AG and Under Armour Inc. also have at least a quarter of their production in Vietnam, according to Wedbush Securities analyst Tom Nikic.

“That said, the most-exposed stocks are down ~20% on average since mid-August, so we think investors have digested most of these issues,” Nikic wrote in a note Monday.

“The next supply and demand disruption is on the energy front,” said Zhikai Chen, head of Asian equities at BNP Paribas Asset Management. “We may see further supply issues if energy rationing becomes more widespread.”

Citigroup’s Global Earnings Revision Index -- a worldwide measure of analyst upgrades minus downgrades of profit expectations -- is plummeting toward negative territory after hitting an all-time high in May.

Cotton climbed near a fresh decade high on Thursday, while decarbonization policies in China and India have led to an acute coal crunch and Europe’s natural gas prices are skyrocketing.

Industrial and construction firms are expected to warn about supply-chain troubles as they begin reporting third-quarter results later this month. Supermarkets to consumer staples firms to e-commerce companies are dealing with a shortage of truck drivers in parts of the world.

And shippers still face a lack of cargo containers at the right place for the right price.

“The broader industrials, the food sector and the construction industry have largely been left unscathed and are vulnerable to some more correction to reflect the risks,” said Sanders Morris Harris’s Ball.