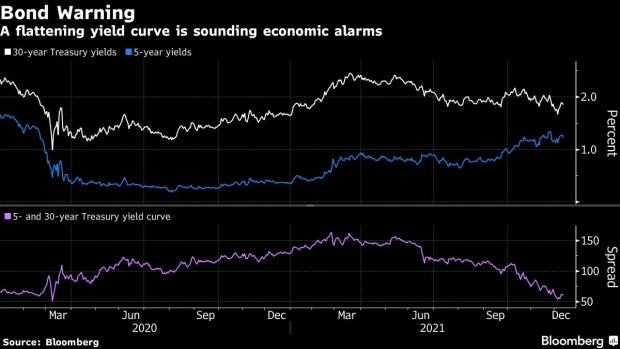 NEW YORK, NEW YORK - DECEMBER 02: A digital board on the floor of the New York Stock Exchange (NYSE) shows the closing numbers on December 02, 2021 in New York City. The Dow rose over 500 points today after falling yesterday due to fears of the omicron strain of the Covid-19 virus. (Photo by Spencer Platt/Getty Images) , Photographer: Spencer Platt/Getty Images North America

(Bloomberg) -- The fastest inflation print in nearly 40 years is rattling nerves on Wall Street where economically sensitive trades are hitched to an ultra-accommodative Federal Reserve.

The spread between five- and 30-year Treasury yields has narrowed relentlessly this quarter, with that curve now near the flattest since March 2020. It’s a sign bond traders are betting faster rate hikes will undercut the red-hot economic expansion, possibly disrupting the business cycle in the name of inflation-fighting credibility.

A slew of stock market corners beneath a heady S&P 500 are channeling bond-market angst, with stimulus fading, still-clunky supply chains and a new coronavirus variant spreading.

Yet it’s far from clear-cut. Many say the bond warning is a head fake with plenty of juice left in stock trades hitched to the robust recovery.

“It’s the expectation that short-term rates are going to increase and a risk that by moving too aggressively the Federal Reserve and other central banks could choke off the recovery,” said Brian O’Reilly, head of market strategy at Mediolanum International Funds. “That’s what the bond market is saying. I don’t necessarily agree.”

He still recommends a modest tilt toward beaten-down value shares given their sharp discounts to the rest of the market, even as the bond market’s alarm signal over economic growth jars assumptions behind popular reflation trades.

Read more: Inflation Is the Biggest Threat to the Bedrock 60/40 Portfolio

Caution has crept back into cross-asset markets this quarter as the Fed sends its clearest signal yet it will hasten monetary tightening. In the wake of the hawkish turn, swaps are pricing in close to three quarter-point rate hikes in 2022. That’s more than the majority of Fed officials indicated in their most recent forecasts from September, although that is likely to shift when new projections are released on Wednesday.

The Bloomberg Dollar Spot Index is up for a second straight quarter and emerging-market stocks plunged to the lowest level versus their developed peers in 17 years.

U.S. small-caps are set for the worst quarter versus large-caps since the first three months of 2020. A defensive play that goes long profitable shares and short the opposite is similarly poised for its best quarter since early pandemic days.

Hand-wringing over the yield curve has been a familiar feature of post-crisis markets -- and it’s stirring up much contention again this time around. The head of global bonds at Janus Henderson said this week the flattening is near an end. 22V Research says yield-curve relief is coming once Covid fears fade and cyclicals are still the way to go.

By their calculations in a Thursday note, the recent collapse in the two- and 10-year spread relative to its 200-day average stands at the 100th percentile historically, meaning it’s almost never moved as quickly.

“The yield curve is too flat,” said Gene Tannuzzo, the global fixed-income head at Columbia Threadneedle. “Quantitative easing and asset purchases have both become very significant portions of what central banks do. Because of that longer-return yields are less of a natural signal.”

With little conviction, flip-flopping is everywhere. The 20-day volatility of both long-short value and momentum factors jumped to the highest since April this week as risk appetite swung like a pendulum depending on omicron headlines.

For those defying bond worrywarts, there’s much room to bet on another run-up in reflationary trades that lost steam right before summer after the first phase of economic re-opening. The gap between global growth and value stocks -- the market’s priciest and cheapest corners -- has returned to the widest since the 2000 dot-com era as cheap shares underperformed despite a sharp earnings rebound.

It’s not as simple as cheap versus pricey, though. Within the value complex, while stocks like commodities that gain from inflation have fared better, others are being dragged lower by economic worries flagged by the yield curve, said Andrew Lapthorne, global head of quantitative strategy at Societe Generale SA. For example, financial stocks -- which borrow short-term to lend long-term -- are the second-worst sector on the S&P 500 this quarter.

Among expensive stocks, steady ones have outperformed while volatile securities like the futuristic ARK Innovation ETF have suffered.

At Mediolanum, O’Reilly acknowledges that appetite for big risks in speculative tech may be dampened by the Fed. But he’s still finding reason for confidence in economic data.

“We got to remember how accommodative monetary policy is,” he said. “Eleven million job openings in the U.S. does not signal to me the Fed is wrong.”