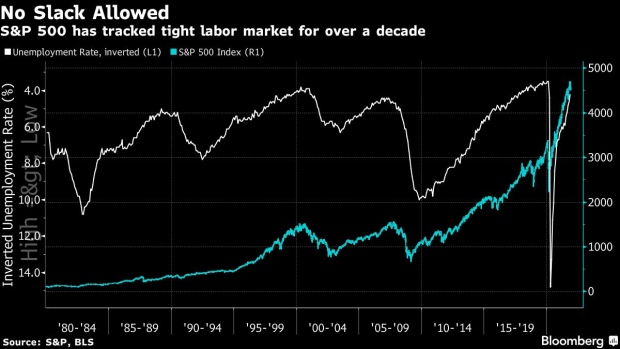 (Bloomberg) -- Equities investors should keep their eyes on the labor market even as traders and central bankers focus on inflation and the monetary policy that addresses it.

The logic is simple. A tighter labor market, demonstrated by lower unemployment, creates higher consumption as more people have jobs and money to spend. The U.S. is a consumer-driven economy, so that boosts corporate earnings and profits, which in turn lifts stock prices.

The previous expansion is the historical anomaly as inflation, which usually accompanies a tighter labor market, has remained low. Much of that is due to 10 years of largely stagnant wages when adjusted for price changes. They dynamic changed during the pandemic as fiscal stimulus and excess savings created a labor market with record job openings and quit rates, according to data going back to 2000, when the data set was introduced.

The Federal Reserve appears to be shifting its focus to inflation from employment, as Chairman Jerome Powell  recently suggested retiring the word “transitory” from the central bank’s vocabulary. That could be concerning given the disappointing November payrolls data. So stock market investors need to see if the labor market can indeed continue its upward momentum -- and if not, whether targeting inflation can keep the economy growing and equities rallying.