US stocks turned sharply lower after Apple Inc.’s plans to slow hiring added to investor worries that the Federal Reserve’s campaign against inflation will drop the economy into a recession.

The S&P 500 extended losses in the last hour of trading, after coughing up a gain that had surpassed 1 per cent. Tech and health-care shares led the drop, with Apple sliding more than 2 per cent in its worst day in almost three weeks. The iPhone maker plans to slow hiring and spending growth next year in some divisions to cope with a potential economic downturn, people with knowledge of the matter said. The news follows a similar move by Alphabet Inc. last week.

Stocks had been rebounding from their June low on expectations that the Fed is starting to gain ground in its efforts to slow price gains. Treasuries slumped Monday, with 10-year yields below 3 per cent -- still lower than the 2-year rate, leaving the curve inverted in what is generally a recession warning.

“What’s been holding us up of course is jobs, so now as we start to get these announcements jobs aren’t maybe as stable, now you’re seeing the impetus toward recession,” said Dana D’Auria, co-CIO at Envestnet Solutions, on Bloomberg Television.

After the bell, International Business Machines Corp. reported sales that beat estimates, a sign that demand for mainframe computers, consulting and cloud services remained strong. The shares were little changed in extended trading. 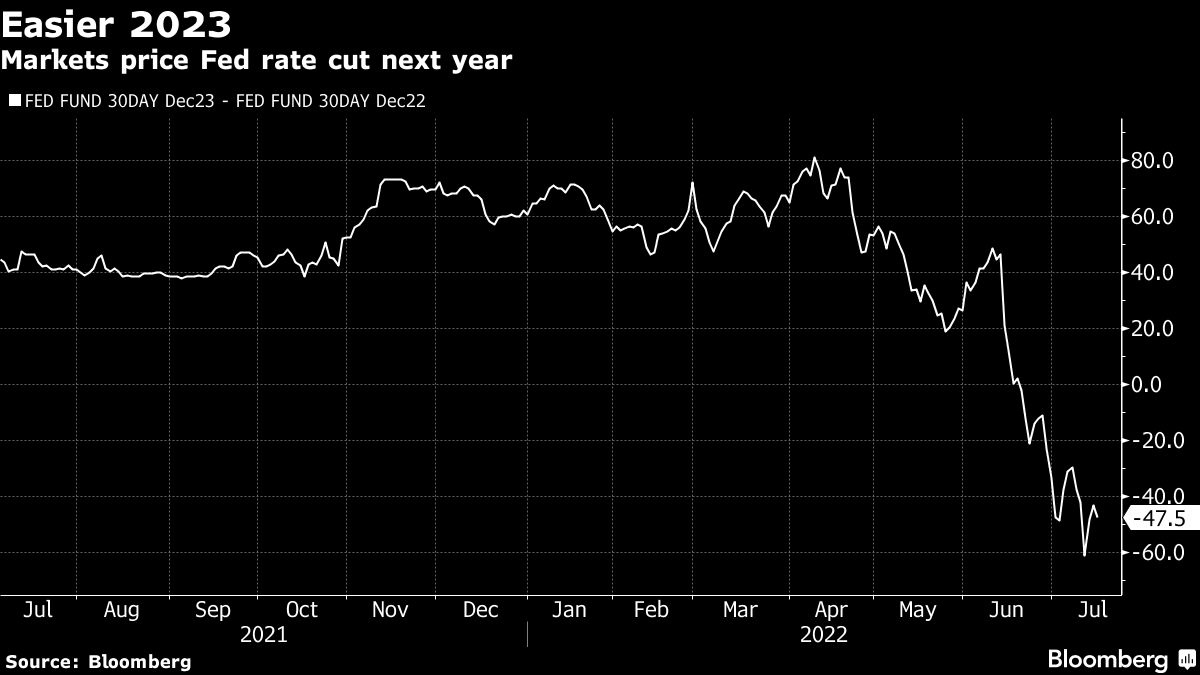 Another pressure point for markets remains gas supply to Europe amid a standoff with Russia over its invasion of Ukraine, with the Nord Stream 1 pipeline scheduled to reopen Thursday following maintenance. Gazprom PJSC declared force majeure on several European natural-gas buyers, a move that may signal it intends to keep supplies capped.

The S&P 500 is up more than 5 per cent from June’s closing low following Friday’s strong rally on renewed hopes that inflation -- and Fed rate hikes -- may be close to peaking. Data last week showing a greater decline in US consumers’ long-term inflation expectations helped squash talk of a 100 basis-point hike in July, while strong retail sales underscored a resilient economy.

“You have to be very careful in how you’re allocating assets and allocating dollars in this market -- but you had a couple of really good numbers this morning from Goldman and Bank of America, on the back of good retail sales,” said Chuck Cumello, president and chief executive officer of Essex Financial Services. “And the key thing in the US economy is the consumer” and, he said, “people are out spending.”

Elsewhere in markets Monday, West Texas Intermediate crude climbed above US$100 a barrel after the Saudis declined to make any promises regarding future output increases, and copper extended its recovery from last week’s slump. Bitcoin rallied, trading above US$22,000 for the first time since early June.

Key events to watch this week: