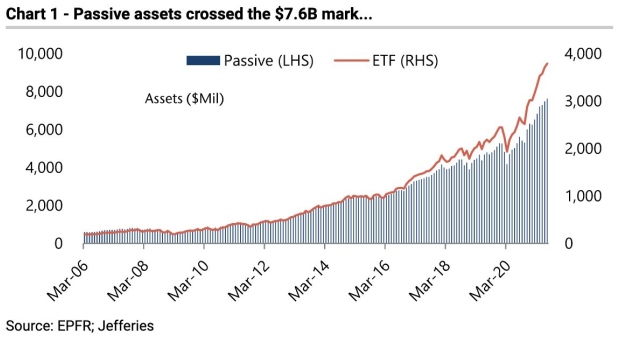 The New York Stock Exchange during the NYSE Summer Series program in New York, U.S., on Thursday, July 15, 2021. The series, which will run through Labor Day, brings the elements of trading floor excitement at the NYSE to Experience Square, the 7,000-square-foot cobblestone area in front of the historic exchange building on Broad Street in lower Manhattan. Photographer: Amir Hamja/Bloomberg , Bloomberg

(Bloomberg) -- Active money managers have clawed back some ground from their passive rivals thanks to this year’s red-hot IPO market.

Passive ownership of the U.S. stock market, based on shares outstanding, has slipped to 20.1% from 21.3% a year ago, according to strategists at Jefferies. That marks the first decline in passive’s share since the firm began tracking it six years ago.

A record number of initial and secondary offerings is behind the shift, they wrote in a Sep. 13 note, because active investors tend to be heavily involved in those events while index funds sit them out.

“An IPO has to be in a benchmark” for passive to pick it up, Steven DeSanctis, a Jefferies strategist, said by phone. “So who actually owns it? It’s going to be institutional clients, and then the retail investors have become far more involved in trading stocks these days.”

The U.S. market for initial public offerings has been booming this year as the economy rebounds from the pandemic and corporations and their largest holders tap seemingly endless investor demand. The post-Labor Day week was the busiest for IPOs in almost two months, and there have been more than $25 billion in initial and secondary offerings since the holiday.

All told, about $600 billion has now been raised in the past year, according to data compiled by Bloomberg.

The idea that a surge in issuance could be shifting the market landscape makes sense, according to Todd Rosenbluth, head of ETF and mutual fund research at CFRA. Indexes often rebalance infrequently and many gauges won’t include stocks without a track record, he said.

Most passive assets are “tracking indexes that usually wait a while before adding a new issuance,” Rosenbluth said. “It’s reasonable to think strong new stock issuance is a contributing factor.”

Thanks to flows and price appreciation, ETF assets have expanded 53% in the past year, DeSanctis and colleague Eric Lockenvitz wrote in a note. For passive overall, it was more like 44%.

“We think many passive funds were converted into ETFs over the past year,” DeSanctis and Lockenvitz wrote. “ETFs will likely continue to take share of the overall passive market as these vehicles have been the winners in asset management.”

The outlook for passive overall is less clear. Active managers are performing well in 2021, especially in the small-cap space, Jefferies notes. Bank of America in a note this week said that could show up in the balance of flows into active and passive funds.