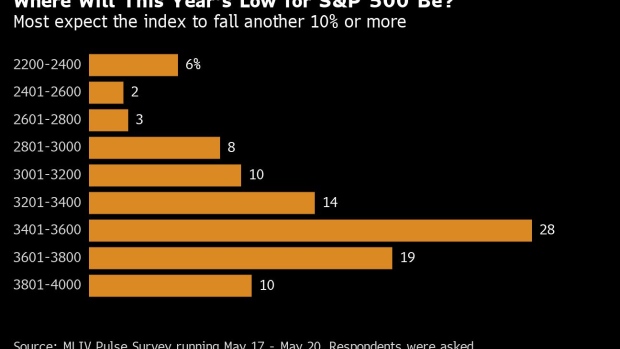 (Bloomberg) -- Get ready for a fresh slump in the world’s most-watched stock index, as economic growth fears spiral and the Federal Reserve embarks on its biggest policy-tightening campaign in decades.

With the S&P 500 flirting with a bear market last week and notching more than $1 trillion in losses, participants in the latest MLIV Pulse survey reckon there’s more pain to come.

The gauge is likely to keep falling this year before bottoming at around 3,500, according to the median projection of 1,009 respondents. That represents a decline of at least 10% from the Friday close of 3,901 -- and a gut-wrenching 27% drop from the January peak.

The Fed’s hawkish-at-all-costs posture, the chaos in supply chains and intensifying threats to the business cycle are all undermining confidence in Corporate America’s profit machine, while equity valuations keep sinking.

After the longest run of weekly losses in more than two decades, just 4% of the MLIV readers reckon the S&P 500 has found a bottom for the year based on closing levels. And a handful see a historic rout in motion to 2,240 -- re-testing the pandemic lows.

Money managers endured a worse drawdown in the Covid-spurred tumult of 2020, but that’s scant consolation with projected losses of this scale.

“I still think the worst is not behind us,” said Savita Subramanian, head of US equity and quantitative strategy at Bank of America Corp., on Bloomberg Television Friday. “There’s a pervasive fog of negative sentiment out there.”

The renewed haven bid for US government bonds suggests money managers are getting increasingly fearful about the economic trajectory, with lockdowns in China and the prolonged Russia-Ukraine conflict taking their toll.

As the retail-stock meltdown kicked off last week, respondents became more bearish over the latter part of the May 17-20 polling period. On average MLIV professionals in the research, risk management and sales community were more pessimistic than their peers in portfolio management and sell-side trading. (The mean data can be skewed by outlier views.)

Meanwhile, Marko Kolanovic at JPMorgan Chase & Co. is downplaying fears of an oncoming US recession and the median estimate from prominent Wall Street strategists suggests the index will close the year out at 4,800, suggesting hopes for a market bounce later this year. For Kristina Hooper, while an economic downturn is “pretty much priced in,” she doesn’t see that happening.

“Sentiment is very negative, which supports the view we’re closer to the bottom,” said the chief global market strategist at Invesco Ltd.

Yet as central bankers seek to engineer a tightening of financial conditions to moderate excesses, the risks of further cross-asset chaos is very real.

Asked which event will take place before the Fed shifts to dovish policy, 47% of respondents said they anticipated the S&P 500 falling 30% from its peak, while a similar proportion said US unemployment would rise to 6%, from 3.6% currently.

More than 40% expect investment-grade credit spreads to blow out beyond 250 basis points before the monetary-easing cycle kicks in, while around one-in-four see American home prices tumbling 20%.

Meanwhile, some 31% of respondents said the end of the Fed’s hiking cycle would deliver the biggest boost to growth and 27% indicated a preference for a scenario whereby China ends its zero-Covid policy.

Around one in five said that a bigger growth dividend would come if the war in Ukraine were to end, and a similar proportion voted for a drop in crude oil to $70 a barrel.