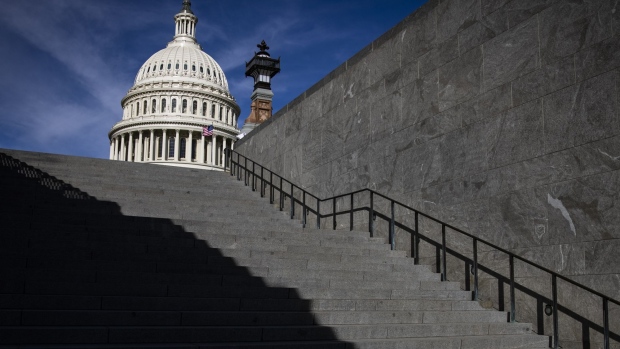 The U.S. Capitol building in Washington, D.C., U.S., on Wednesday, March 17, 2021. President Biden's next major economic package will almost certainly have to rely once again on a Democrat-only approach after Senate Minority Leader McConnell shut the door on Republican support for tax hikes to pay for it. Photographer: Samuel Corum/Bloomberg , Bloomberg

The bill would apply to the spouses and dependent children of those officials, according to an outline sent to lawmaker offices last week by House Administration Chair Zoe Lofgren. The restrictions also cover “commodities, futures, cryptocurrency, and other similar investments,” according to the outline.

The legislation would require public officials to either divest current holdings or put them in a blind trust. Investments in mutual funds or other widely held investment funds and government bonds would be allowed.

The bill may be released as soon as Monday, according to a person familiar with the matter. It hasn’t been scheduled for a vote, though House Majority Leader Steny Hoyer has said it’s possible it could come to the floor this week in the middle of an already jam-packed schedule before lawmakers go on break ahead of the November midterm election.

While conservative Republicans and progressive Democrats alike have been clamoring for restrictions on stock trades by members of Congress to avoid conflicts of interest, legislation has been hung up by questions about how broad to make the ban and whether to include family members. A group of senators is working on their own version of the legislation and there’s little chance of Congress taking any final action before the midterms.

“I believe that a meaningful and effective plan to combat financial conflicts of interest could help restore the public’s faith and trust that our public servants act in the public interest,” Lofgren, a California Democrat, wrote in the notice to lawmakers, which was obtained by Bloomberg.

The current law doesn’t prohibit lawmakers from owning or trading individual securities, but it bans members of Congress from using nonpublic information available to them for personal benefit. It requires any transaction be disclosed within 45 days.

A New York Times analysis of disclosure forms published earlier this month found that from 2019 to 2021 almost 100 senators or representatives reported that they or an immediate family member traded a stock or other financial assets that had some overlap with issues before congressional committees on which they served.

One of the key points of debate has been whether to include family members in any ban on trading. House Speaker Nancy Pelosi’s husband, Paul Pelosi, made his fortune in real estate and venture capital and frequently draws attention for his stock trades. Pelosi in February gave her support to banning lawmakers from trading equities, a reversal of her earlier stance on the subject.

Another potential point of contention is applying the requirements to the Supreme Court. The Congressional Research Service in an April report said that Congress imposing a code of conduct on the judiciary would “raise an array of legal questions,” including whether it would violate the constitutional separation of powers.

Justices and lower court judges already file annual financial disclosures and are barred from participating in cases where there’s a direct conflict of interest. Despite that, the CRS report says that the Supreme Court has never directly addressed “whether Congress may subject Supreme Court Justices to financial reporting requirements or limitations upon the receipt of gifts.”