Stock trading was volatile ahead of Friday’s options expiration. Treasuries rose alongside the dollar. Commodities sank.

The S&P 500 edged higher, while the Cboe Volatility Index was on track for its biggest weekly surge since January. An earlier equity slide was driven by anxiety over the withdrawal of Federal Reserve stimulus, the virus spread and global supply chains. Metals prices slumped as part of a selloff that extended to agriculture, oil and natural gas.US$

Equities have struggled to sustain momentum after hitting another all-time high earlier in the week. Investors are bracing for the withdrawal of unprecedented liquidity as the developed world looks to mass vaccinations to keep the recovery on track. However, the persistent spread of coronavirus and slowing China growth raise questions about whether the global economy can absorb the winding down of stimulus. That’s pushing traders to buy protection against stock swings. 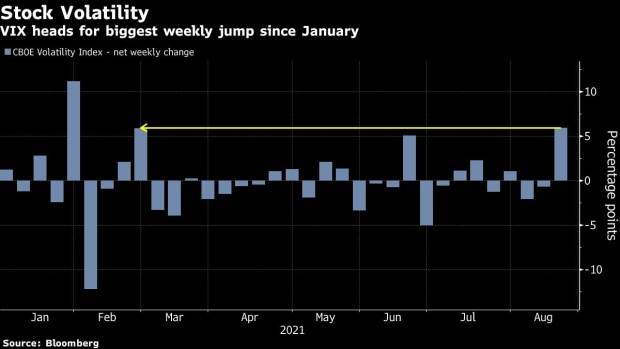 COVID-19 patients are dying in U.S. hospitals at levels not seen since February -- and the numbers could worsen as intensive-care units overflow in parts of the South. Three American senators tested positive despite being vaccinated, bringing to at least six the number of members of Congress to report recent infections.

Nvidia Corp., the largest U.S. chipmaker by market value, rallied after reporting a surge in earnings and giving predictions that exceeded even rosy Wall Street estimates. Robinhood Markets Inc. sank after warning cryptocurrency-driven trading that fueled quarterly revenue may quickly fade. Chinese stocks listed in the U.S. endured another day of selling after officials unleashed a fresh round of proposed regulations. Tencent Holdings Ltd. and Alibaba Group Holding Ltd. each tumbled more than 6 per cent.