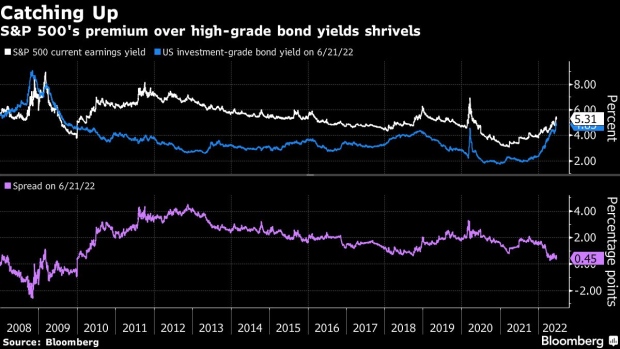 A trader works on the floor of the New York Stock Exchange (NYSE) in New York, U.S., on Monday, Aug. 23, 2021. U.S. futures rose Monday along with stocks in Europe as concerns about China's wealth crackdown faded and traders took advantage of last week's selloff to pick up equities at favorable valuations. Bonds declined as demand for havens eased. Photographer: Michael Nagle/Bloomberg , Bloomberg

(Bloomberg) -- Bonds have been whispering in the ears of stock investors all year. Now they’re starting to shout.

Soaring inflation and tightening monetary policy boosted rates on 10-year Treasuries to 3.5% last week, the highest since 2011. While comparing bonds with ever-volatile stocks is tricky, various measures show the allure of fixed income growing. Stocks generate about 5.3% of their price in earnings, on average, making the gap between the two asset classes’ “yield” close to the slimmest since 2018.

Applying the same exercise to blue-chip corporate bonds, shows that investment-grade yields were just 45 basis points below that of the S&P 500’s payout through Tuesday, the smallest gap since 2010.

Rising rates across the fixed-income landscape are chipping away at the “there is no alternative” mantra for stocks. For the bulk of the past decade, the narrative has been that low rates globally have pushed yield-hungry investors out on the risk spectrum into assets such as equities. However, with the Federal Reserve hell-bent on taming inflation, even if it means taking growth down with it and tipping the economy into a recession, bonds are beckoning once again.

“For income investors, for our multi-asset class income strategy, we’re leaning more into the bond market than we have over the last decade,” James Camp, Eagle Asset Management Inc. managing director of strategic income, said in a Bloomberg Television interview. “You add on a corporate credit spread that’s widened, you’re getting 4.5, 5% yield for an asset class that’s been out of favor for a long time. So it’s time to take a good hard look at that.”

Stocks have sputtered this year under the weight of the hottest inflation in four decades, which prompted the Fed to unleash the biggest rate hike since 1994 last week. The S&P 500 has plunged more than 20% so far in 2022, while the technology-heavy Nasdaq 100 has dropped roughly 29%.

That tightening campaign has also pressured yields higher, to the point where valuations on bonds look appealing. Benchmark 10-year Treasuries currently yield 3.15% after entering the year near 1.50%, while the average rate on US high-grade debt touched 5% -- the loftiest since 2009.

That looks like a buying opportunity to the likes of Guggenheim chief investment officer Scott Minerd. With the Fed aggressively targeting inflation and the US economy potentially heading into a recession, markets have likely seen the high-water mark in long-dated yields, he said, while stocks are poised to suffer in such an environment.

“We’re close to the peak in long-term rates and our internal model in the last week or so has flipped to favoring long bonds today over owning stocks,” Minerd said in an interview with Bloomberg Television last week in the wake of the Fed’s meeting. “Now is the time you have to be extending your duration and investing in longer-dated securities.”

There is also opportunity to be found when sizing up riskier credits versus equities. Average US junk bond yields have climbed to 8.5%, more than 3% above the S&P 500’s earnings yield. Excluding the pandemic turmoil, that’s the highest premium since early 2016, Bloomberg data show.

Given that high-yield bonds equities are both risk assets, the balance is currently tilted in favor of junk debt, in the eyes of Northern Trust’s Katie Nixon. Both will likely post high single-digit gains, but investors are able to clip coupons on bonds in addition to that return, she said.

“Adjusting that 8 to 9% yield for risk, it does look pretty attractive relative to the much higher-risk return on an equity,” Nixon, chief investment officer at Northern Trust, said via phone. “You’re at least getting a yield, and that gives you the luxury to stay the course. And right now, that yield component is pretty high.”

That view rests on the belief that high-yield spreads to Treasuries will remain contained and corporate defaults will stay low, Nixon said. The Fed’s pandemic-era credit backstop and near-zero interest rates have kept the default rate ultra-low over the past two years, though Deutsche Bank and others have warned that dynamic may shift should growth contract.

The wild card for every asset class is the Fed. The central bank delivered a 75-basis-point hike last week, with traders pricing in nearly 200 basis points of additional tightening through year-end. It remains to be seen if that will be enough to tame inflation, which erodes the returns on fixed-income securities.

“If you think equities might do mid-single digit to low-double digits over the next 12-18 months, that makes high-yield bonds look pretty competitive assuming we don’t have a big jump in defaults,” Margie Patel, Allspring Global Investments senior portfolio manager, said in a Bloomberg Television interview. “It doesn’t look like we will, but we haven’t seen the Fed complete their tightening so it’s not really clear.”