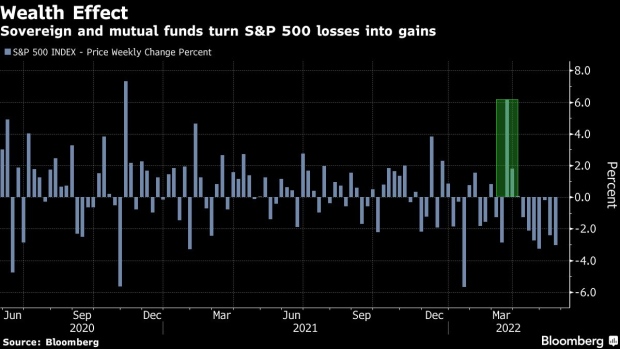 (Bloomberg) -- The world’s biggest money managers look poised to revive wilting stocks with $250 billion of investments that could spark buying by quant-momentum traders -- adding 10% to equity values by the end of June.

JPMorgan Chase & Co. projects sovereign wealth, pension funds and balanced mutual funds will tilt their portfolios in favor of the asset class in the coming weeks to meet allocation targets, in the largest rebalancing drive since the first quarter of 2020.

The fresh allocations may encourage a risk-on reversal among Commodity Trading Advisors – an influential group of trend-chasing systematic investors who are currently bearishly positioned.

All this could wield an outsize influence on stock prices in the current climate of poor liquidity, as investors struggle to buy and sell in size without moving the underlying market.

“Given how low equity market depth is at the moment, the cumulative impact of this rebalancing flow on equities by the end of June could exceed 10%,” JPMorgan strategist Nikolaos Panigirtzoglou said in an interview.

JPMorgan strategists have been beating the bullish drum for months, making them outliers in an increasingly bearish market. Morgan Stanley strategist Michael Wilson warned Monday that the main US stock gauge could fall 13% from current levels amid mounting risks to the economic expansion. Participants in an MLIV survey expect a further 10% decline from Friday’s closing level.

JPMorgan had forecast a boost to global markets of as much as 10% from quarterly rebalancing flows in March -- while that proved over-optimistic the MSCI World Index nevertheless clocked up an advance of 2.5%, the only month of gains all year.

Pension and sovereign wealth funds that form the backbone of the investing community typically rebalance their market exposures every quarter to get back to their allocations of 60% stocks and 40% bonds.

Declines in stock market values have now left them short of their targets. To get back to balance, they’ll start to move about $45 billlion from bonds to stocks by month end, and then shift another $207 billion by the end of June, according to the US bank.

U.S. defined benefit pension plans -- which manage $7.5 trillion of assets -- would need to shift up to $167 billion into equities to meet their long-term targets and bring them back to March levels.

According to JPMorgan calculations, Japan’s $1.6 trillion GPIF, the world’s largest pension fund, would have to buy $16 billion of equities to get back to its target by the end of the quarter. The $1.3 trillion Norwegian Oil Fund could move $13 billion into the stock market while the Swiss National Bank could buy $11 billion by quarter-end.

Internal limits at pension funds are less strict than sovereign wealth funds and balanced mutual funds so the rebalancing flows may be smaller than calculated.

Spokespeople for SNB and Norges Bank Investment Management -- which manages the Norwegian Oil Fund -- declined to comment. A spokesperson for GPIF didn’t immediately respond to an email outside of business hours seeking comment.

The S&P 500 is down more than 18% from its high and slipped into a bear market during Friday’s session. The selloff has sent the index deeper into a seventh weekly decline that would make the longest losing streak since the dotcom bubble burst more than two decades ago.