U.S. stocks fell for a second day as rising virus cases around the world led to renewed concern over the continued economic impact, overshadowing a batch of solid corporate results.

The S&P 500 extended its slide from an all-time high, with investors showing caution ahead of the brunt of the earnings season. All eyes will be on whether an anticipated rise in profits will bring with it forecasts for stronger growth ahead. International Business Machines Corp. climbed after reporting its largest revenue growth in 11 quarters, while United Airlines Holdings Inc. paced a selloff in travel stocks on a bigger-than-expected loss. Netflix Inc. tumbled after the close of regular trading as its new streaming users lagged estimates.

While American equities are trading at a valuation that’s about 35 per cent above the average of the past decade, investors are focused on what’s forecast to be the best earnings season in two years. One of their biggest concerns is whether companies are equipped to handle mounting inflation pressures as the economic recovery gains momentum.

“Earnings season is ramping up, and there’s this concern about how the multinationals will give their guidance in view of the fact that we haven’t drawn a line under COVID yet,” said Fiona Cincotta, senior financial markets analyst at City Index. “That is just starting to unnerve investors. Demand for riskier assets has come off.” 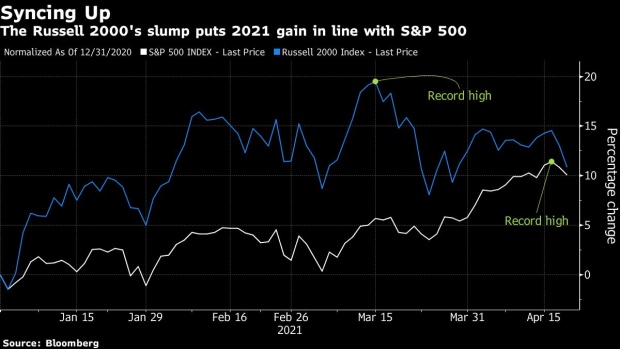 For David Donabedian, chief investment officer at CIBC Private Wealth Management, the stock market has been just taking a breather after a big rally, but there are still reasons to be bullish.

Elsewhere, the dollar rose for the first time in seven sessions, while the Treasury 10-year yield dropped to the lowest level in more than five weeks.