More risk to the downside than upside for equities: Jason Draho

US stocks rose for the third straight day as investors parsed economic data that hinted at slightly slower growth, prompting some to brush off the hawkish stance that the Federal Reserve reiterated in its June meeting minutes as outdated.

The S&P 500 ended the session up 0.4 per cent after swinging between gains and losses as investors digested a flurry of data. The tech-heavy Nasdaq 100, whose members have been more sensitive to the rise in bond yields, also rose. The two- and 10-year US Treasury yield curve remained inverted. The dollar held onto its gains. Oil fell below US$100 a barrel, extending its drop for a second day.

All eyes were on the Fed as it revealed details of its June meeting on Wednesday afternoon. Fed officials agreed last month that interest rates may need to keep rising for longer to prevent higher inflation from becoming entrenched, even if that slowed the US economy, the minutes showed. But traders on Wednesday also grappled with economic data which pointed to a slight deceleration in the pace of growth, spurring some to conclude that the Fed’s minutes don’t reflect the current reality of the economy.

Data released Wednesday showed that US job openings dipped slightly in May but remained near a record, pointing to resilient demand for labor even as optimism about the economy’s prospects dim. Growth in the US services sector also eased in June to a more than two-year low as orders softened amid ongoing hiring challenges and capacity constraints.

But not all investors are convinced that the Fed’s reiterated stance has little bearing on what’s to come.

“Indeed, the minutes reflected a Fed that is concerned about inflation, and even though they believe that inflation could stay high for a while and growth risks are skewed to the downside, they talk about the potential of an even more restrictive policy in time,” said Priya Misra, global head of rates strategy at TD Securities. “This is hawkish relative to a market that has increasingly become convinced that the Fed is about to blink on hikes due to an imminent recession.”

Despite recent fluctuations in the stock market, volatility is still far off levels usually observed during other powerful bear markets. The Cboe VIX Index hasn’t crossed the 40 points mark since the latest selloff began, something unseen over the past two decades. 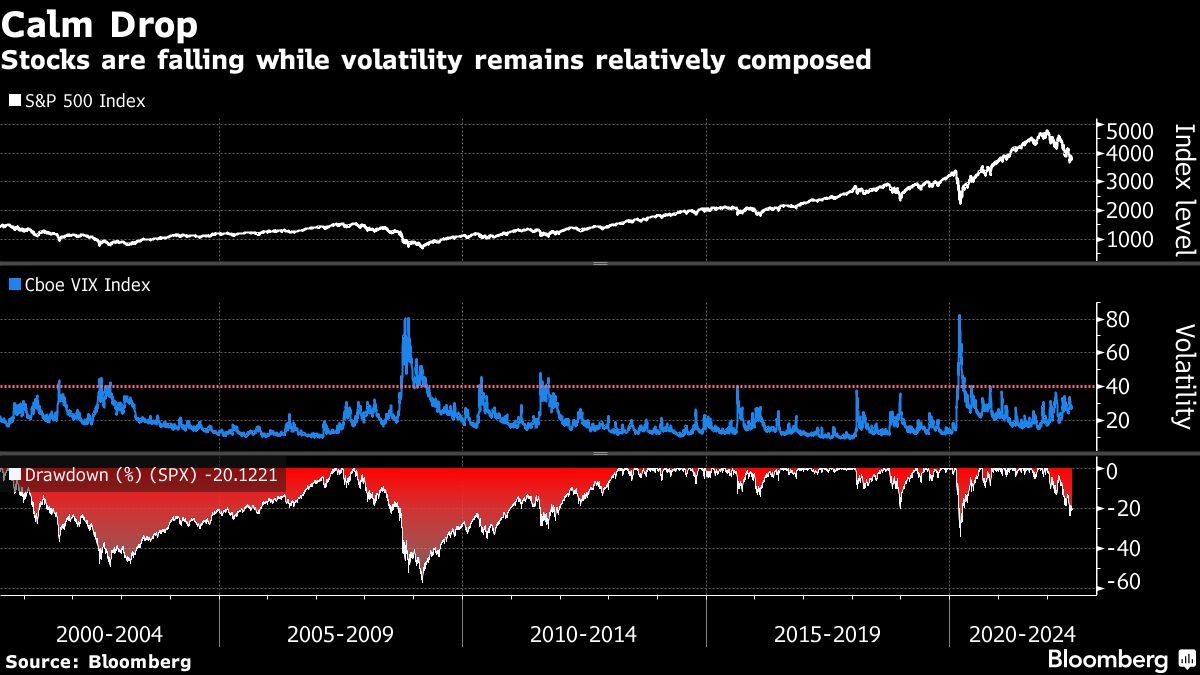 The odds of a US recession in the next year are now 38 per cent, according to latest forecasts from Bloomberg Economics. Bond traders are penciling in a policy turnaround by the Federal Reserve, with current hawkishness giving way to interest-rate cuts in the middle of 2023. Some investors saw additional hints of this in the Fed’s minutes.

“What got my attention was the reference to a potential pause at year-end,” said Cliff Hodge, chief investment officer at Cornerstone Wealth. “This is new, and extremely important. They were already thinking about where the appropriate level is to stop tightening policy in June, before the spate of economic data really deteriorated.”

Central banks around the world have been tightening monetary policy to contain consumer prices. But a renewed spike in China’s Covid cases and a worsening gas crisis in Europe are signals that a worldwide slowdown is on the horizon despite these efforts.

Bitcoin fell again, wobbling around the US$20,000 level.