U.S. equities slumped after the vice-chair of the Federal Reserve suggested rates could rise by 2023 and mixed economic data for July showed U.S. companies adding far fewer jobs than expected.

The yield on the 10-year U.S. Treasury note rose to 1.17 per cent, gold pared back a more than 1 per cent increase, and the dollar was stronger after initial weakness.

The Fed’s Richard Clarida said the central bank was on track to begin interest rates hikes in 2023 with a possible taper announcement later this year. The comments came after hints the U.S. Treasury may cut bond sales this fall, and an ADP employment report was at odds with record ISM services index growth, indicating persistent hiring obstacles despite improvements in the economy.

The S&P 500 fell as General Motors Co. and CVS Health Corp. declined after earnings, while the Nasdaq 100 gained as technology stocks outperformed. 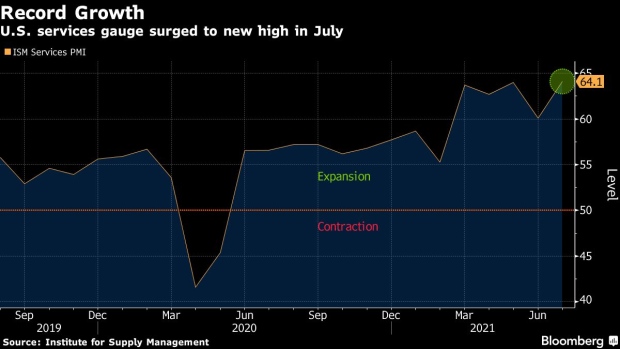 “After losing 19.6 million jobs in March and April last year, we’ve since added back 13.1 million,” Peter Boockvar, chief investment officer for Bleakley Advisory Group, wrote in a note ahead of Friday’s U.S. jobs report. “I really don’t like to use the word ‘stagflation’ but we have a form of it now, unfortunately, which will make the job of the Federal Reserve even that much more difficult.”

Earlier in the day, the Stoxx Europe 600 index hit a fresh record, with technology stocks leading the advance. The travel and leisure sector also outperformed as shares of online gaming companies recovered after Chinese state media toned down their criticism of the industry.

The day’s rotation calls the reopening trade into question, Cate Faddis, Grace Capital president and chief investment officer, said in an interview. “The market’s signaling we’re not out of the woods yet. On the other hand, we’ve had a very strong year. It’s rational for the market to take a deep breath.”

With stocks in Europe and the U.S. at or around record highs, equities have weathered concerns about the spread of delta virus variant as expectations for continued stimulus and solid earnings have propelled shares higher. However, risks still remain.

“Volatility has been high really over the course of the past 18 months and I think that reflects just continued uncertainty,” Wes Crill of Dimensional Fund Advisors said by phone. “Now you have the variant strain. Now you have concern over vaccination rates not being as high as maybe some would like to see. And that’s continuing to, in some ways, fuel market volatility, because that just increases the uncertainty.”