The S&P 500 and Nasdaq 100 declined in turbulent trading as data showed employers added far fewer jobs than anticipated last month. While the report is unlikely to deter the Fed from announcing cutbacks to its bond buying next month, it may remove pressure for the central bank to raise interest rates any time soon.

“We don’t think this derails the Fed from tapering, and with labor markets still somewhat slack, tightening is still a long way away,” said Jay Barry, JPMorgan head of USD government bond strategy.

The 10-year Treasury yield rose to 1.6 per cent. Gold erased a 1.5 per cent advance. And crude oil briefly topped US$80 a barrel in New York for the first time since 2014. 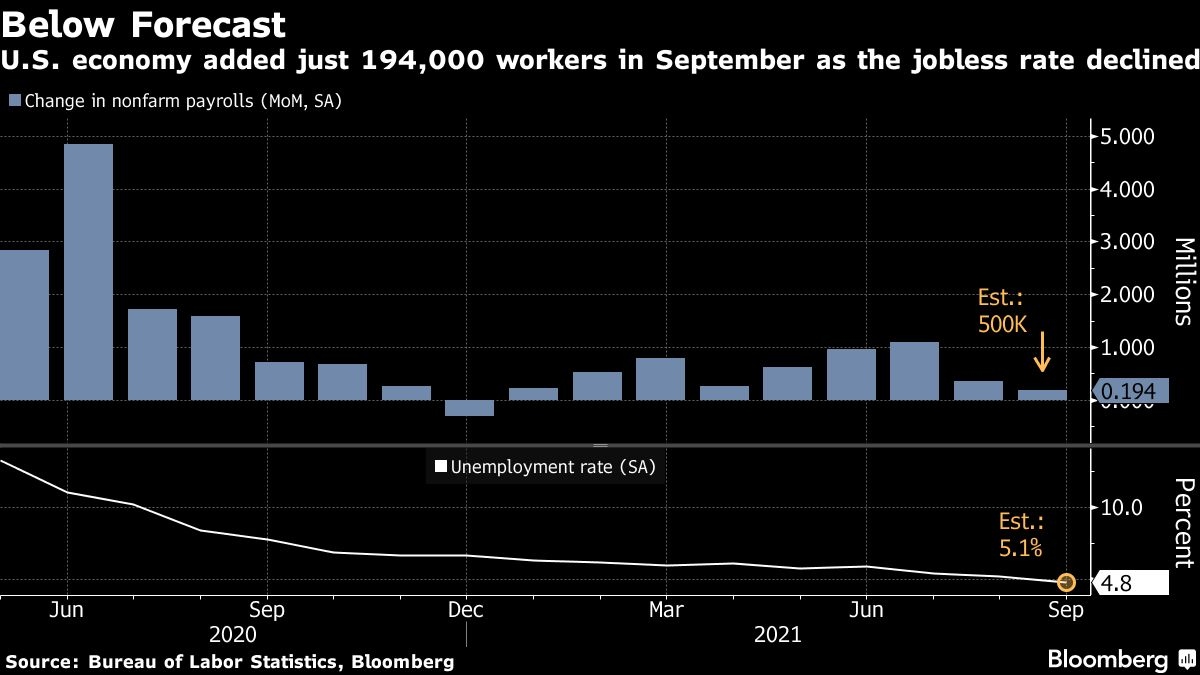 The S&P 500 finished the week higher as stocks struggled for a direction on Friday. The session was marked by high volatility with traders wading in to buy at the market lows.

“The buy-the-dip mentality rules the day,” said JJ Kinahan, chief market strategist at TD Ameritrade, by phone. “That’s really what it comes down to.”

The monthly jobs report was the second miss in a row, signaling weakness in the labor market just as the Fed is preparing to cut back stimulus. The biggest job losses in the report came from the government sector while hiring in leisure and hospitality nearly doubled, suggesting the business outlook is strengthening, albeit slowly.

“The industries that have seen really strong gains are in some of those that were particularly impacted by the pandemic; so things like leisure, and hospitality, retail,” said Kara Murphy, chief investment officer of Kestra Holdings. “The pandemic is still driving a lot of this kind of dislocation.”

The September payrolls had the smallest advance of the year after a upward revision for August figures. Meanwhile, the unemployment rate fell to 4.8 per cent and average hourly earnings jumped.

With the turbulence, it’s unclear how the market is interpreting the data, said Mike Loewengart, managing director of investment strategy at E*Trade Financial.

“On one hand it’s a knock to our economic recovery,” he said. “On the other, delaying Fed policy means the easy money era continues.”