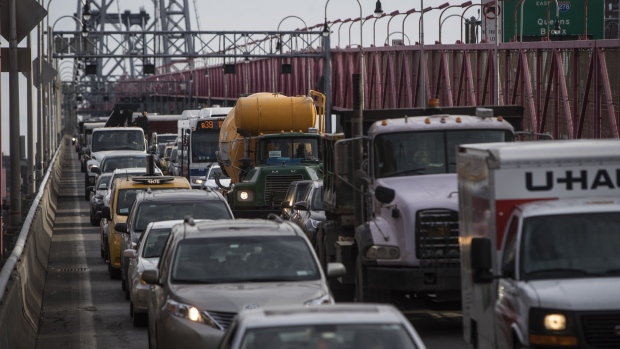 Vehicles sit in traffic while exiting the Williamsburg Bridge in New York, U.S., on Wednesday, Dec. 20, 2017. New York's Metropolitan Transportation Authority decided to close the L line entirely to work on extensive repairs full time, instead of a one-track-at-a-time closing that would take three years. The tunnel, which carries passengers under the East River from Brooklyn to Manhattan, will close for 15 months in April 2019. The Williamsburg Bridge will see a dramatic increase in traffic under the new plan. , Bloomberg

“The heavy trade in transports remains one of the most under-reported and significant caution signs for the broader stock market right now,” Tom Essaye, a former Merrill Lynch trader who founded “The Sevens Report” newsletter, wrote to clients Tuesday. “Especially because the most recent weakness has been driven by bad earnings, profit warnings and lowered guidance.”

Take FedEx Corp., for example, which makes up 10 per cent of IYT. The shipping company has fallen about 30 per cent over the last year, and new hurdles are arising. The company cut its earnings outlook last week, citing cooling global demand amid the U.S.-China trade war and Brexit uncertainty.

The underperformance of transportation stocks is notable, especially for believers in the century-old Dow Theory, which purports that moves in industrial and transport stocks must be confirmed by one another to be sustained. The Dow Jones Transportation Average is down more than 3.5 per cent this month and has underperformed the Dow Jones Industrial Average five of the last six weeks.

There is a silver lining amid the warning signal. The transportation index rebounded 0.7 per cent Tuesday, while the industrials climbed 0.9 per cent.