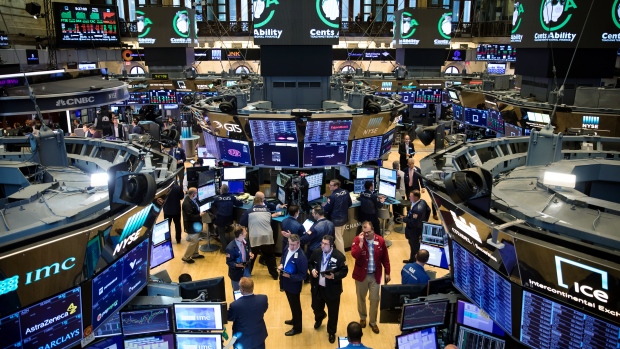 Traders work on the floor of the New York Stock Exchange (NYSE) in New York, U.S., on Friday, May 24, 2019. U.S. equities climbed at the end of a bruising week in which escalating trade tensions dominated markets. , Michael Nagle/Bloomberg

Stocks declined as investors mulled the implications of the partial trade deal reached last week between the U.S. and China. Oil retreated and the dollar strengthened.

The S&P 500 Index had fluctuated most of Monday after China appeared to pour cold water on a pact touted by President Donald Trump, with people familiar with the situation saying it wanted to iron out details before signing it. Trading was about 28 per cent below the 30-day average. A tweet from the Global Times’ editor-in-chief painted a more optimistic outlook, gave equities some support. U.S. debt markets are closed for the Columbus Day holiday.

“I think given we’ve had a bit of good news, chances are we’re going to be on the doubting side this week,” said Peter Jankovskis, Oakbrook Investments LLC’s co-chief investment officer. “That’s been the natural ebb and flow of the whole process.”

The iShares MSCI Turkey ETF slumped 3.9 per cent. President Trump said on Twitter that the U.S. will increase steel tariffs on Turkey back up to 50 per cent. Trump also said some Turkish officials will also face sanctions and the U.S. will also stop trade negotiations with Turkey. Earlier, the nation’s stock market tumbled and its currency eased.

The Stoxx Europe 600 Index closed lower, while Asia stocks climbed, helping sustain a rally in emerging-market assets after the positive conclusion of the latest round of trade talks.

“I expect there will be a deal,” Treasury Secretary Steven Mnuchin said Monday on CNBC television. The sides made “substantial progress” last week in negotiations and Mnuchin said he expects Trump and President Xi Jinping to finalize the accord at a summit in Chile next month.

The pound weakened, after rocketing for the past two sessions, as European Union negotiators warned that Brexit plans from U.K. Prime Minister Boris Johnson are not yet good enough to be the basis for an agreement.

Elsewhere, West Texas crude oil dropped after surging the most in almost a month on Friday.