We are on the verge of a very serious global recession: Mark Yusko

The S&P 500 rose to the highest closing level in more than a week amid a broad-based rally, with all 11 major industry groups advancing. The Nasdaq 100 jumped more than two per cent, as Apple Inc., Tesla Inc. and Nvidia Corp. bounced back from a tech-led selloff Monday.

Treasury yields climbed Tuesday, with more policy-sensitive front-end tenors leading the way higher reflecting expectations for a series Fed rate hikes, as Powell said the central bank won’t hesitate to raise rates above neutral if needed. No one should doubt the U.S. central bank’s resolve to curb the highest inflation in decades, Powell said. He also noted that financial conditions have tightened quite a bit.

“The market is in the middle of a powerful moment where it’s digesting a major and relatively rapid change in expectations for monetary policy and what financial conditions should look like to keep inflation under control,” Lauren Goodwin, economist and portfolio strategist at New York Life Investments, said by phone. “And so we’ve already seen a lot of tightening in market financial conditions.” 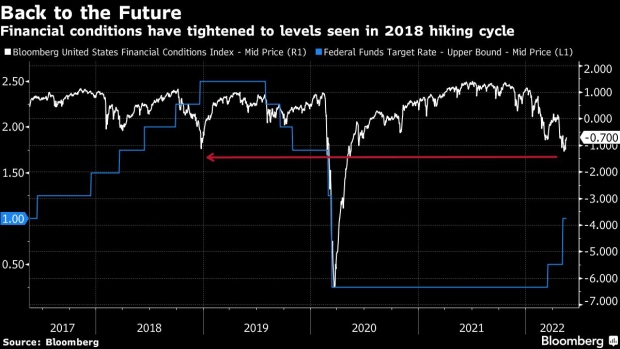 Risk sentiment caught a tailwind Tuesday after data showed U.S. retail sales grew at a solid pace last month, the latest evidence that consumers remained resilient in the face of inflation and higher rates. Another report showed factory production rose at a solid pace for a third month in April.

The dollar stayed lower, weakening against all of its Group-of-10 counterparts except the yen, while European currencies led gains. The risk mood in Europe got a lift from data showing the economy in the euro area expanded more than initially estimated at the start of the year, defying headwinds from the early days of the war in Ukraine.

Stocks briefly dipped to session lows in morning trading amid reports that New York City raised its COVID-19 alert level to high amid increasing pressure on the health care system, a move that it signaled Monday could be imminent.

On the corporate front, Citigroup Inc. jumped after report showed Warren Buffett’s Berkshire Hathaway took a stake in the lender. Walmart Inc. tumbled after cutting its profit outlook due to inflationary pressures. Boeing Co. rose after the Wall Street Journal reported that the black box for a China Eastern Airlines Corp. jet suggested the plane took an intentional nosedive.

Meanwhile, Shanghai reported three days of zero community transmission, a milestone that could lead officials to start unwinding a punishing lockdown. Flareups elsewhere in China showed how hard it is to tackle the omicron strain.

Cryptocurrencies weathered the latest stablecoin turbulence, with Bitcoin rising above the US$30,000 mark. Oil hovered around US$114 a barrel in New York amid news that the US government will allow Chevron Corp. to negotiate its oil license with Venezuela.