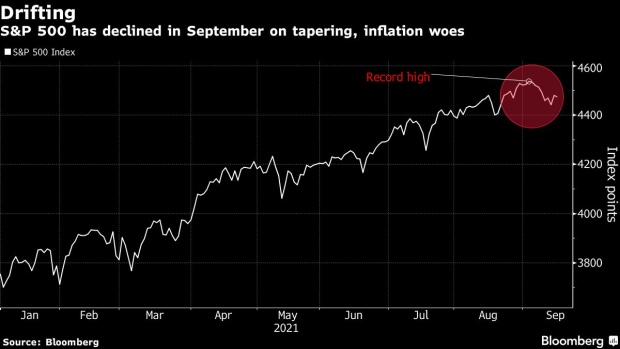 (Bloomberg) -- Market participants spurned cash this week in the biggest exit in more than a year and piled into equities on bets that the Federal Reserve will remain investor-friendly, according to Bank of America Corp.

Money-market funds saw an outflow of about $62 billion in the week through Wednesday, the most since July 2020, BofA said in a note, citing EPFR Global data. Investors put $51 billion into stocks, the largest addition since March, and $16 billion into bonds.

READ: Fund Managers Sour on Stocks Have Nowhere Else to Go, BofA Finds

The Fed will probably hint at its meeting next week that it’s moving toward scaling back monthly asset purchases and make a formal announcement in November, but would hold interest rates near zero through 2022, according to a Bloomberg survey of economists. Investors have also been keeping track of President Joe Biden’s plans to raise taxes, as moderate Democrats have balked at recent efforts to target the assets of the wealthiest.

The seven-month rally in stocks has stumbled in September over concerns about the rollback of monetary stimulus, inflation risks and China’s regulatory crackdown. But major fund managers remain invested and bullish on equities, citing a lack of investment alternatives.

Equity inflows were led by U.S. stock funds with an addition of about $46 billion, according to BofA. U.S. large caps saw their biggest inflows on record and technology shares were investor favorites among sectors. Gold funds attracted $37 million, the largest amount in six weeks.