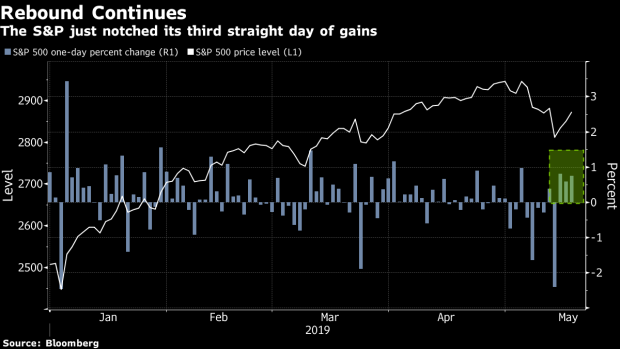 (Bloomberg) -- Asian stocks were poised to rise Friday after U.S. equities posted a third day of gains and Treasury yields climbed, with trade tensions taking a back seat amid simmering tensions.

The S&P 500 climbed 0.9% as solid earnings and strong housing data buoyed shares, while futures pointed to higher starts in Japan, Australia and Hong Kong. The 10-year Treasury yield rose back to 2.39% and the dollar strengthened. China’s offshore yuan resumed its slide amid the China-U.S trade stand-off. In most recent developments, the Trump administration threatened to blacklist China’s Huawei Technologies Co. and Walmart Inc. warned tariffs would lead to higher consumer prices.

Data supporting the robustness of U.S. companies and the economy, along with hints from the Trump administration that it may be willing to compromise on trade, helped stocks bounce back from the battering they took when the tariff battle with China flared last week. But the headlines have kept traders on tenterhooks, most recently with U.S. President Donald Trump signing an order that’s expected to restrict Chinese telecommunications firms from selling in the U.S.

Elsewhere, the pound remained under pressure as U.K. Prime Minister Theresa May faced a new threat to oust her.

Here are the main market moves:

To contact the editors responsible for this story: Christopher Anstey at canstey@bloomberg.net, Rebecca Jones