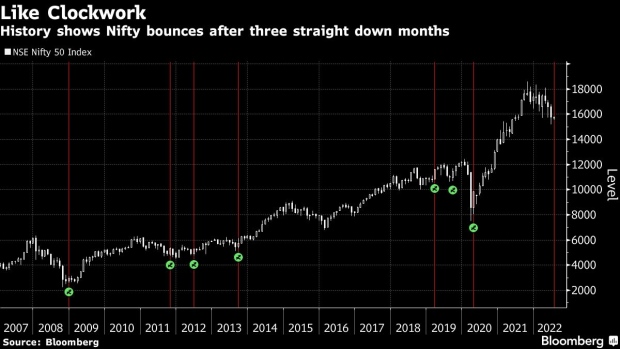 (Bloomberg) -- Indian equities are poised to rebound from a three-month selloff triggered by rising interest rates and an exodus by foreign funds, if history is any guide.

NSE Nifty 50 Index dropped nearly 10% from April through June, marking the eighth time since 2008 that the benchmark fell for three consecutive months. But in each of the seven previous incidences, the gauge swung the other way and delivered an average gain of 7% in the fourth month, data compiled by Bloomberg show.

“There is a strong case for July bullishness,” according to Karthick Jonagadla, a founder of Mumbai-based Quantace Research. Nifty stocks are now trading at 19.5 times their earnings on trailing basis, the cheapest level since February 2016, which boosts the case for a recovery, he said.