Cut stimulus, and say goodbye to the stock market’s armor. That’s been the bet for a decade. Now the moment has come. But no signs of catastrophe have arisen.

Bulls can thank the stagecraft of Jerome Powell, the U.S. Federal Reserve chairman, who on Friday gave the strongest signal yet that the central bank will begin tapering its monthly bond purchases this year. Not only did the dreaded T-word fail to halt stocks’ steady climb, the S&P 500 Index posted its biggest gain in a month, and put in its second-best Jackson Hole week since 2014.

Powell did just enough to preserve the view that his goals align with investors’: growth that is fast enough to boost hiring and earnings but not inflation, and an approach to stimulus that avoids shocks and leaves actual interest rates alone. While other Fed speakers sowed angst with hawkish pronouncements in recent days, Powell’s messaging defused the tension.

“Powell and the Federal Reserve should get a lot of credit for telegraphing the tapering conversation and avoiding a tantrum,” said Michael Arone, chief investment strategist at State Street Global Advisors’ U.S. SPDR business. “I think they can take a bit of a victory lap.” 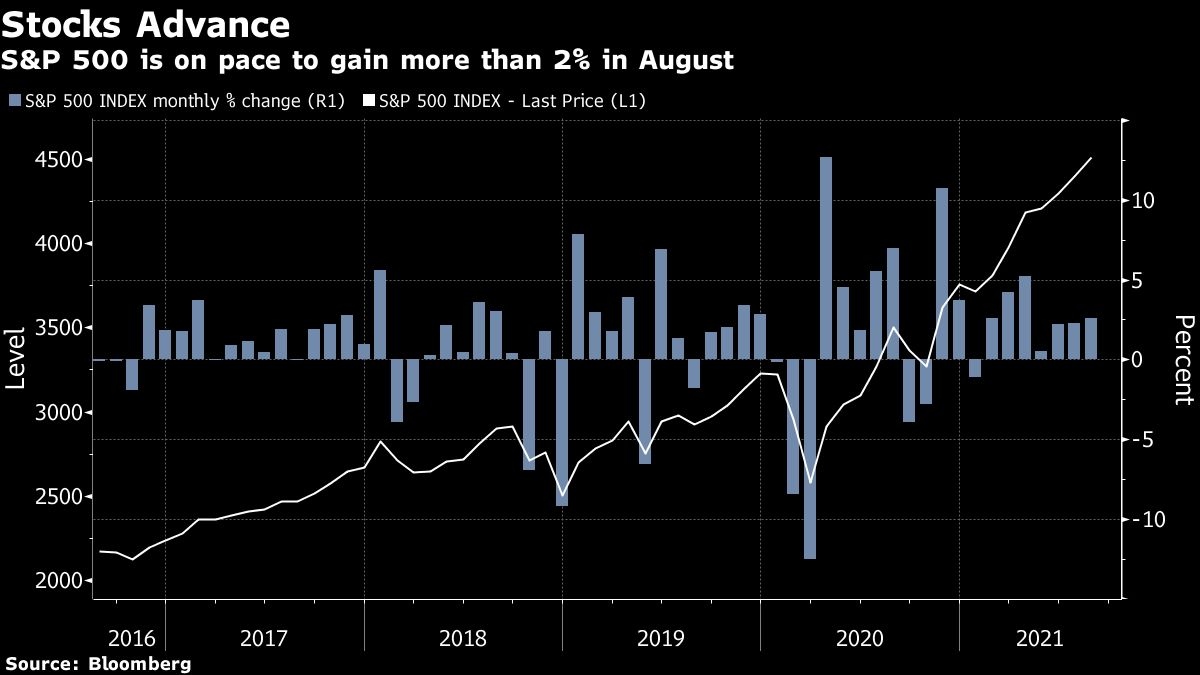 Back in 2013, news that the Fed would slow its purchases of Treasuries and mortgage-backed securities following the global financial crisis caused a convulsion in markets. Investors rushed to sell riskier assets for the safety of bonds in an episode nicknamed the “taper tantrum.”

But bad memories of that shouldn’t fuel conceptions that the upcoming paring of asset purchases will do the same, said Art Hogan, chief strategist at National Securities.

“What happened in 2013, as opposed to what’s happening today, was a drive-by announcement of taper,” he said in a phone interview. “Today, we have the opposite of a drive-by taper announcement -- we’ve got a well-choreographed, well-telegraphed plan and the transparency has alleviated any adverse market reaction because it’s so well-known.”

Fed Bank of Dallas President Robert Kaplan told Bloomberg in June that policy makers learned lessons from 2013 and hoped to avoid a repeat. And hints that the taper would start by year’s end have been in the public record at least since the Federal Open Market Committee meeting in July, according to minutes of that gathering.

The central bank has been purchasing US$80 billion of Treasuries and US$40 billion of mortgage-backed securities monthly since last year to support the U.S. economy during the pandemic, often cited as a reason for stocks’ historic rally amid the pandemic. And plenty of questions exist over how the taper will be timed. But Hogan at National Securities notes that even in cutting total purchases, the central bank is still a long way from stopping them. The Fed’s balance sheet could increase by another US$700 million, he estimates.

To be sure, stocks often take their time before reacting to changes in policy -- one week of smooth sailing doesn’t mean there are no storms ahead. Still, for anyone worried that the first tangible signs of withdrawn stimulus spelled doom for investors, the latest stretch is reason for encouragement.

The S&P 500 wrapped up its fourth up week out of six, as did the tech-heavy Nasdaq 100. The broader benchmark is on pace to add more than 2 per cent in August, which would mark its third straight month of advances greater than that amount. The S&P has logged such consecutive gains just 13 times over the last three decades, according to Frank Cappelleri at Instinet LLC.

Speaking at the Jackson Hole policy forum, Powell said the U.S. economy has met the central bank’s test of “substantial further progress” toward its inflation goal and that it has made “clear progress” on the labor-market front. At the same time, he cautioned that a move to begin winding down the bond-buying program should not be interpreted as a sign that rate hikes would soon follow too.

“It was kind of a dovish delivering of the tapering message, and that has made markets pretty happy,” said Kathy Jones, chief fixed income strategist for Schwab Center for Financial Research. “Powell succeeded in sending the message that the Fed is likely to start tapering soon, maybe as early as after the September FOMC meeting, but that it was still a dovish message that they would take their time, that policy would remain accommodative until more progress was made, particularly on employment.”

Meanwhile, investors are watching other developments, including Congress’s progress on both the infrastructure deal as well as the US$3.5 trillion budget resolution. Corporate America is also wrapping up a historic earnings season and vaccination rates against COVID-19 are ticking higher.

“We have strong employment, we have great earnings, we have well-capitalized banks, we have economic data that looks pretty good across the board,” said Randy Frederick, managing director of trading and derivatives for Charles Schwab Corp. “We’re in a really good position, I think, for tapering,” he said. If anything, he added, the market’s worried about inflation, which means investors could “welcome the taper when it occurs.”