Stocks climbed to a record after surprisingly weak jobs data eased fears about higher inflation and a cutback in stimulus. The dollar slumped, while Treasuries were little changed.

All major groups in the S&P 500 rose, with energy, real-estate and industrial shares leading the charge. Earlier in the day, technology led equity gains as softer economic data drove investors into the perceived safety of pandemic darlings -- megacaps flush with cash and stay-at-home stocks. A gauge of giant growth companies such as Apple Inc. and Amazon.com Inc. pared most of its advance.

The long-awaited employment data rattled markets, with payrolls up only 266,000 in April, trailing the projected 1 million surge. For several analysts, the figures may give a boost to President Joe Biden’s US$6 trillion economic agenda and another reason for the Federal Reserve to keep its accommodative stance. Treasury Secretary Janet Yellen said the report “underscores the long-haul climb back to recovery,” while retaining her expectation of a return to full employment next year.

“Today’s report suggests that the jobs recovery may not be quite as rapid as many had expected,” said Mike Bell, global market strategist at JPMorgan Asset Management. “If this slower pace of job gains persists, then the Fed is likely to start raising rates later than markets had been expecting. While less good for the economy than a booming labor market, a ‘Goldilocks’ jobs recovery that is neither too hot nor too cold could continue to support equity markets.” 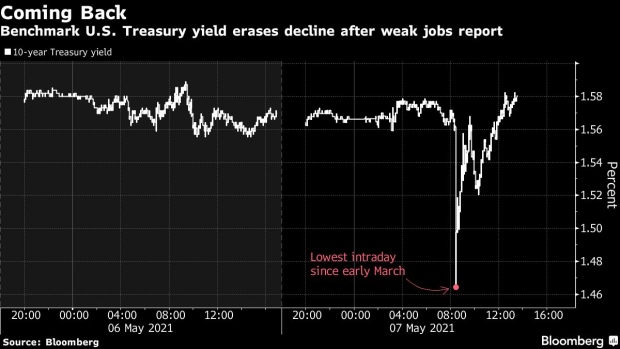 Federal Reserve Bank of Minneapolis President Neel Kashkari told Bloomberg Television he has “zero sympathy” for critics on Wall Street, who slam the central bank’s aggressive support of the U.S. economy while millions of Americans remain out of work.

“We need to rebuild this labor market and put them back to work. Then there will be plenty of time to normalize monetary policy,” he said.