The S&P 500 trimmed its biggest monthly advance since November, with energy and technology shares leading losses on Friday. Twitter Inc. sank as the social media company posted a sluggish start to the year in its advertising business. Despite living up to Wall Street’s profit expectations, Chevron Corp. slid after disappointing investors who were anticipating a revival of buybacks.

Signs of excess risk taking in markets show it’s time to start debating a reduction in bond purchases, said Robert Kaplan, president of the Dallas Fed, breaking ranks with Chairman Jerome Powell. Data showed personal incomes soared in March by the most in monthly records back to 1946, powered by fiscal stimulus. A key measure of consumer prices that the Fed officially uses for its target had the biggest increase since 2018.

With the S&P 500 rallying more than 10 per cent in the first four months of 2021, the adage of “sell in May and go away” may be on many investors’ minds. However, JPMorgan Chase & Co. urged traders to get ready for a revival of the reflation trade as the economic reopening gathers pace. Meanwhile, Credit Suisse Group AG’s Jonathan Golub raised his forecast for the stock benchmark, citing a “red-hot economy fueling earnings.” 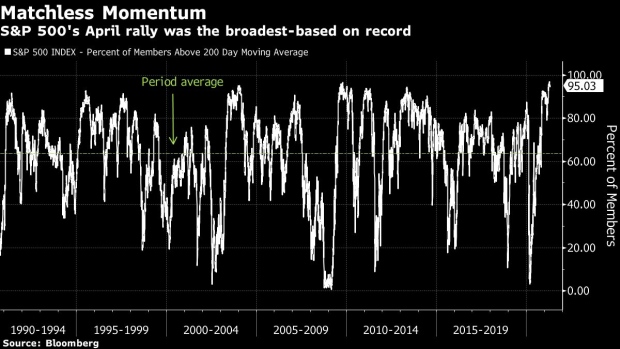 Still, for Ralph Bassett, head of North American equities at Aberdeen Standard Investments, companies have done so well that the market is getting to a point where a lot of that optimism may be priced in.

“The setup is very good, but with multiples where they are, the upside risks are just really becoming less likely at this stage,” he said.

The S&P 500 has had better months, but never before has a rally been so widespread, according to one measure tracked by Bloomberg. During 18 sessions in April through trading on Thursday, 95 per cent or more of the index’s members traded above their 200-day moving average.