The S&P 500 rose as Ralph Lauren Corp., Gartner Inc. and Under Armour Inc. gained after earnings. Meanwhile, the Nasdaq 100 also recovered from earlier losses after the Chinese state media criticized the “spiritual opium” of gaming and the U.K. was said to be considering a block on Nvidia Corp.’s US$40 billion deal to acquire Arm Ltd.

Crude oil pared back some of its earlier losses, helping to propel energy shares higher. Earlier the sector pushed the Stoxx Europe 600 to a record after BP Plc followed its Big Oil peers by increasing dividends and share buybacks. However, a slide in oil prices weighed on the gains as the spread of the delta virus variant continued to pose a risk to demand. Markets had also slumped earlier on news New York City will require proof of vaccination for customers at indoor restaurants and gyms.

“I think what you’re going to continue to see is this continued volatility. For a while, the primary volatility focus was is there inflation or isn’t there?” JJ Kinahan, chief market strategist at TD Ameritrade, said in an interview. “This week it’s the good earnings versus the variant, and will it pause the reopening of businesses?” 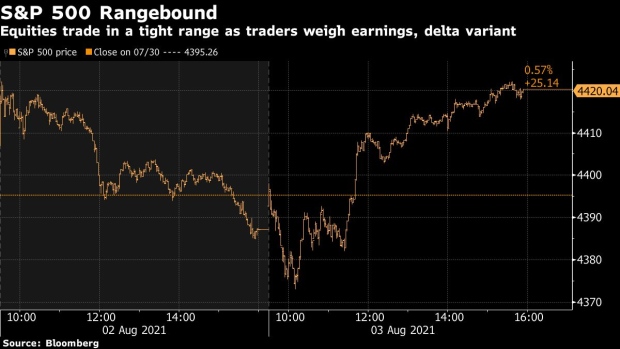 The 10-year U.S. Treasury yield fell to 1.17 per cent after dipping as low as 1.15 per cent. Meanwhile the dollar was slightly weaker against major peers.

Second-quarter earnings have been robust for the most part, but the months-long advance in Treasuries could point to a weaker period ahead. Traders are awaiting key U.S. jobs data this week to gauge the recovery and are monitoring the impact of price pressures sparked by pandemic-related disruptions. Federal Reserve Governor Christopher Waller said he could back a tapering announcement by September, if the next two monthly U.S. employment reports show continued gains.

“Recent weeks and months have been a churning and choppy time for equities,” wrote Willie Delwiche, an investment strategist at All Star Charts. “Large-cap U.S. indexes have chopped and churned higher, while beneath the surface (and overseas) the chopping and churning have had a downward bias. Strong convictions about either breakouts or breakdowns have not been rewarded.”