Stocks rallied at the end of a chaotic week in financial markets, with a little help from Federal Reserve Chair Jerome Powell’s reassurance that bigger rate hikes would be off the table for now even after the hot inflation readings of the past few days.

For a market plagued by fears that more aggressive monetary tightening could tip the economy into a recession, Powell’s remarks ended up soothing frayed nerves and sparking a rebound in beaten-down risk assets. Despite the strong gains on Friday, many traders aren’t yet convinced that equities have reached a bottom after a selloff that shaved US$10 trillion from US stock values in 18 weeks. Instead, they say investors should still brace for volatility as the Fed’s ability to fight price pressures without causing a hard landing may depend on factors outside the central bank’s control.

After sinking almost 20 per cent from a record and flirting with a bear market, the S&P 500 saw a broad-based rally Friday. It still posted a sixth straight week of declines -- the longest losing streak since June 2011. The Nasdaq 100 outperformed amid a rally in giants like Apple Inc., Microsoft Corp. and Amazon.com Inc. Meanwhile, Elon Musk caused chaos over his takeover offer for Twitter Inc., first claiming his bid was “temporarily on hold” and then maintaining he’s “still committed” to the deal -- sending the social-media giant into a tailspin. Tesla Inc. jumped. Treasuries fell with the dollar.

Over the course of another tumultuous week for financial markets, some prominent voices on Wall Street pondered on the outlook for stocks after a powerful selloff. Peter Oppenheimer at Goldman Sachs Group Inc. said on Tuesday that the rout had created buying opportunities, with headwinds such as inflation and hawkish central banks already priced in. Meantime, Morgan Stanley strategist Michael Wilson noted that equities were still “not priced for this slowdown in growth from current levels.”

There are five telltale indicators that are used to call a bottom in stocks, including spikes in the Cboe Volatility Index, puts substantially outnumbering calls and a dismal market sentiment, according to Lindsey Bell, chief markets and money strategist at Ally. While the VIX has stayed near 30, past bear markets featured moves above 45. “A volatility climax is a signature of market bottoms,” she said. 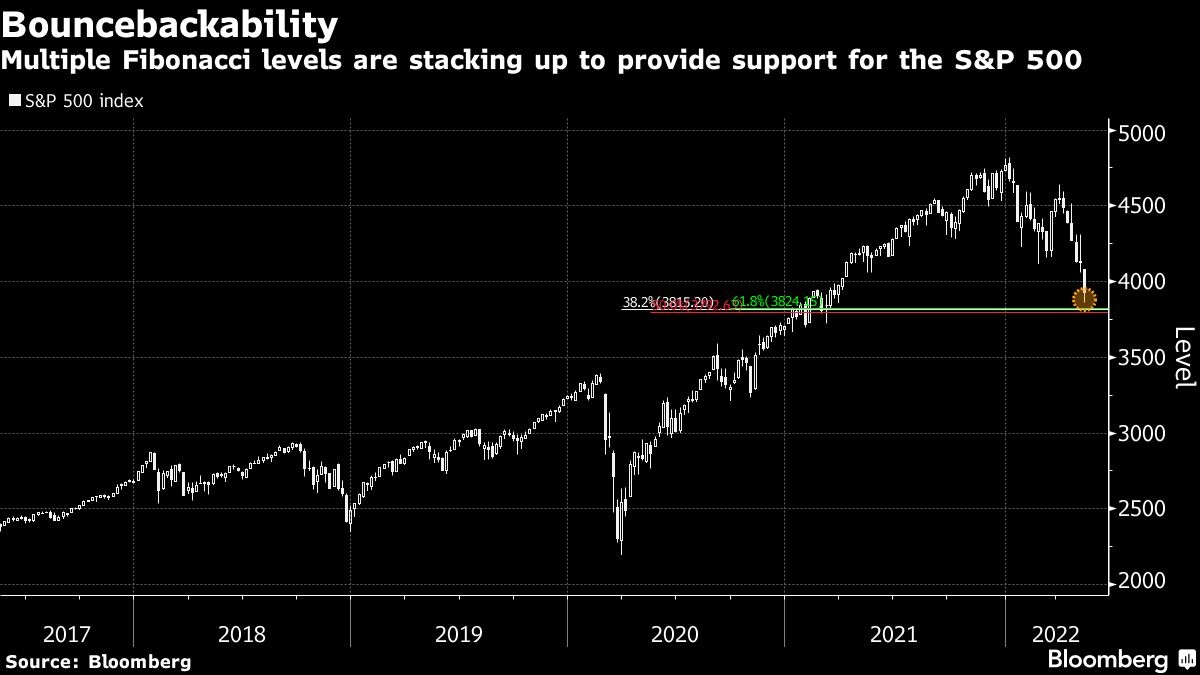 Expectations of a technical bounce in the S&P 500 are building after the gauge’s relentless slide of the past several weeks. One possible zone of support comes from a cluster of Fibonacci levels -- which captures retracements of rallies in the American equity benchmark from 2020 COVID crash lows.

Equities, bonds, cash and gold all saw outflows in the week ended May 11, Bank of America Corp. strategists led by Michael Hartnett wrote in a note, citing EPFR Global data. At US$1.1 billion, technology stocks suffered their biggest withdrawals so far this year, second only to financials, which lost US$2.6 billion.

“The definition of true capitulation is investors selling what they love,” Hartnett said, citing assets like big tech, for example. “Fear and loathing suggest stocks are prone to an imminent bear-market rally, but we do not think ultimate lows have been reached.”