The S&P 500 shed 1.8 per cent, pushing further into correction territory, as technology stocks sold off amid the rising tensions and a cyberattack on several Ukraine government and bank websites. Treasuries extended losses and the dollar was little changed.

Investors have been weighing the potential impact of an initial tranche of Western sanctions after Biden said Tuesday Russia had started to invade Ukraine. The sanctions -- and others by U.S. allies -- stopped short of sweeping measures, though officials warned they could be scaled up. 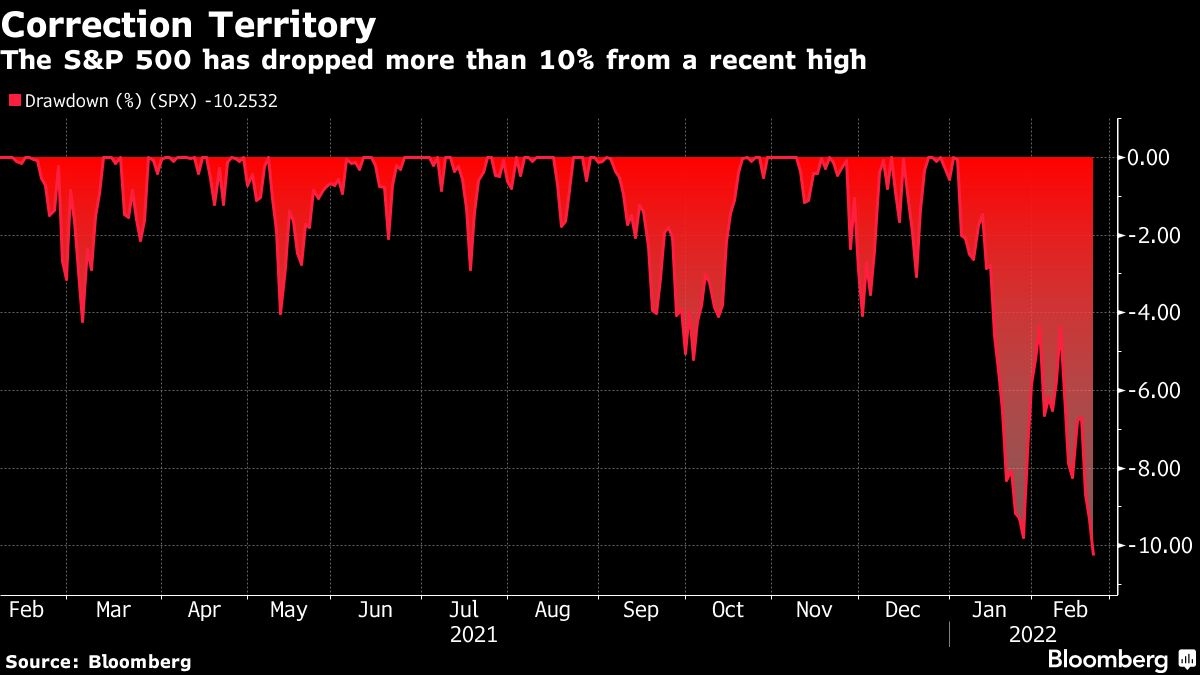 “There was some optimism among investors we spoke to as the White House’s Russia sanctions were not as sweeping as originally expected, but our sense is that this saga is far from over and most of our contacts expect both additional sanctions in the days ahead as well as a targeted legislative package,” wrote BTIG’s Isaac Boltansky.

Fears that the Ukraine tension could snarl commodity supplies -- putting further pressure on inflation --  has bolstered everything from energy to wheat and nickel. Gold climbed. Oil fluctuated after earlier gains. Elsewhere, the CBOE Volatility index rose to the highest since late January before paring back advances.

A key question is whether or not the jump in raw material costs will spur more aggressive central bank policy. Bets on the number of rate increases by the Federal Reserve in 2022 have settled at about six 25-basis-point hikes, down from seven on Feb. 11. San Francisco Fed President Mary Daly repeated her view Wednesday that March is the appropriate time to begin adjusting monetary policy “absent any significant negative surprises.”

“The number one issue really is inflation and the Fed; that’s what everybody’s worried about,” said Matt Maley, chief market strategist at Miller Tabak + Co. “The situation in Ukraine is making it worse because it makes inflation worse -- if oil prices and natural gas prices are going to remain elevated -- that only makes the inflation concerns grow.”

President Vladimir Putin has denied Russia intends to invade Ukraine, however, lawmakers have given him the green light to deploy troops to separatist-held regions.

“There is still an overhang of doubt regarding Russia’s intentions and how far they plan on going with this process,” wrote Brad Bechtel, global head of FX at Jefferies LLC. “But for now, the expected case is what has happened as opposed to anything more than that.”