A lot of good names will be selling off today: Allan Small

U.S. stocks fell the most in about four months amid a global rout sparked by investor angst over China’s real-estate sector and U.S. Federal Reserve tapering.

The S&P 500 pared losses in the last hour of trading to 1.7 per cent as traders emerged to buy the dip again after the benchmark bounced off closely watched moving averages. The index was down as much as 2.9 per cent at one point, the biggest slide since October 2020. Treasuries gained along with the dollar before Wednesday’s Fed meeting, where policy makers are expected to start laying the groundwork for paring stimulus.

“If the market is ripe for a correction, ‘tis the season for one,” said Anne Wickland, Portfolio Manager at Easterly Investment Partners LLC. “Most selloffs seem to occur at the end of the third quarter, beginning of the fourth as investors start to adjust future expectations.” 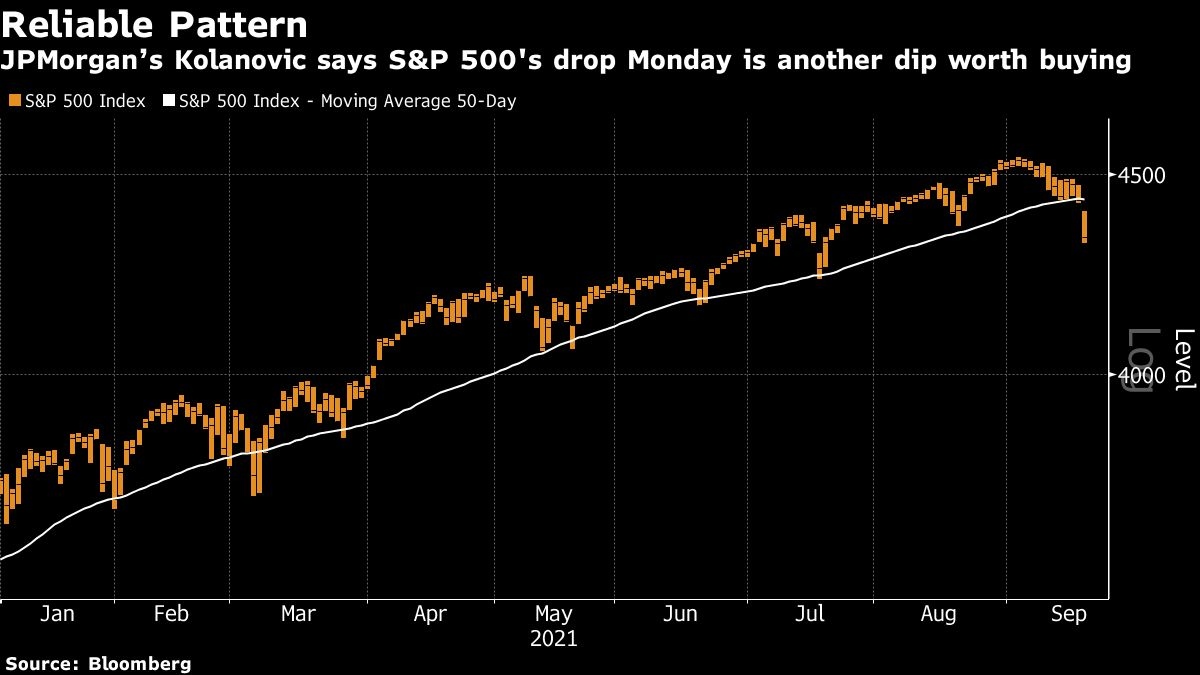 The S&P 500’s drop was an opportunity to buy stocks as the global economic recovery is poised to pick up momentum, according to JPMorgan Chase & Co. strategists led by Marko Kolanovic.

The Stoxx Europe 600 index dropped 1.7 per cent to a two-month low. Raw materials led the broad-based retreat as iron ore extended a slump below US$100 a ton and base metals declined after China stepped up restrictions on industrial activity.

Hong Kong shares slumped amid the biggest selloff in property stocks in more than a year as traders tracked the risk of contagion from the debt crisis at developer China Evergrande Group, which is fueling new fears about China’s growth path.

“China is not investable, not at this point -- even on a government level because you just really don’t know what protection you’re going to have or what the currency is going to do,” Ed Yardeni, president of Yardeni Research, said in an interview on Bloomberg TV.

Aside from Evergrande and the prospect of reduced Fed stimulus, financial markets also face risks from uncertainty over the outlook for President Joe Biden’s US$4 trillion economic agenda as well as the need to raise or suspend the U.S. debt ceiling. Investors were already fretting over a slowing global recovery from the pandemic and inflation stoked by commodity prices.

U.S. Treasury Secretary Janet Yellen said the U.S. government will run out of money to pay its bills sometime in October without action on the debt ceiling, warning of “economic catastrophe” unless lawmakers take the necessary steps.

Meanwhile, Bitcoin briefly fell below US$43,000. WTI crude oil extended a drop toward US$70 a barrel.