Stay away from speculative tech names as rates hike: Strategist

U.S. stocks fell in choppy trading as investors assessed outlooks for earnings growth amid the potential for monetary policy tightening. The rout pushed the Nasdaq Composite over the threshold into correction territory.

The S&P 500 fell for a second day, closing below a key technical support level for the first time since October. The Nasdaq Composite extended losses, sliding more than 10 per cent from a November high. Treasury yields fell across the curve, even as expectations grow that the U.S. 10-year will top 2 per cent. A dollar gauge declined for the first time in four days.

Global equities have had a volatile start to the year, hurt by a more hawkish Federal Reserve stance, economic disruptions from omicron and risks to company profits due to rising costs. Upbeat earnings from companies including Morgan Stanley, UnitedHealth Group Inc. and Procter & Gamble Co. helped underpin sentiment.

“Right now you have people waiting before they go and buy back in. You have a Fed meeting coming up, so there’s not going to be a lot of movement anywhere until the Fed meeting is over with,” said Jamie Cox, managing partner at Harris Financial Group. “You look around, there’s not a lot of problems in the economy, what you have is just the question of, ‘does all this add up to a faster rate hiking cycle that we anticipate?’ And I don’t think so. I think it’s not likely.” 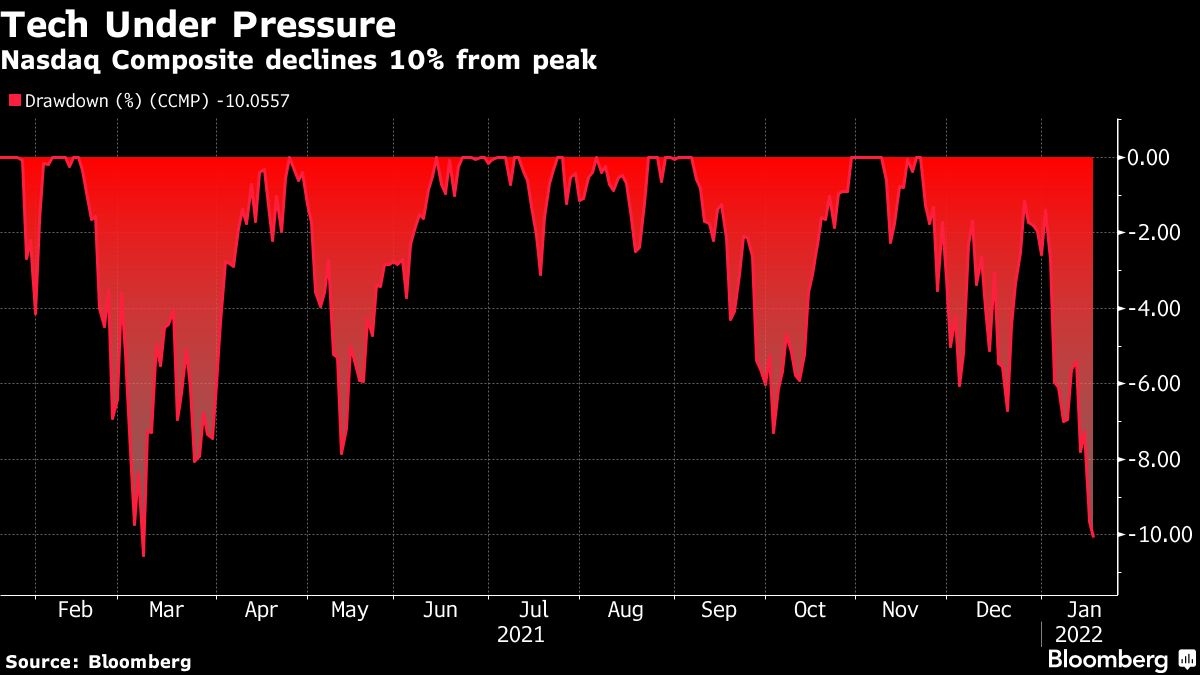 Earnings optimism and dip-buyers vied with speculation that the Fed may deliver more than a quarter-percentage point March interest-rate hike to fight inflation.

On the corporate side, Morgan Stanley rose after raising its profitability targets and posting a surprise increase in equities-trading revenue, while Bank of America Corp. advanced as the bank saw loan growth return with consumers and businesses beginning to take on debt again. Results beyond banks also bolstered sentiment, with UnitedHealth climbing after beating analysts’ highest estimate, and Procter & Gamble advanced after raising its sales outlook.

“We finally got some good news for the banks, but I think the report out of Procter & Gamble was the most compelling news,” said Matt Maley, chief market strategist at Miller Tabak + Co. “People have been worried about input costs hurting margins. Since that was not a problem for PG, it seems to be giving the stock market a relief bounce today.”