Stocks surged as softer-than-expected inflation data fueled bets the Federal Reserve could pivot to a smaller pace of hikes -- a view taken with a grain of salt by market watchers saying officials may still be a long ways from achieving their goal.

Traders went risk-on Wednesday, with the S&P 500 hitting a three-month high. A rally in tech shares sent the Nasdaq 100 more than 20 per cent above its June bottom, leaving it in a bull market going by a commonly held definition. The gauge still sits 19 per cent below its November record. The Cboe Volatility Index slid to a level last seen in April.

The dollar sank the most since the onset of the pandemic. Treasury two-year yields were lower by about five basis points in late trading after plummeting nearly 20 basis points immediately after the data. West Texas Intermediate crude topped US$91 a barrel.

For a market plagued by fears about the Fed’s struggles to tame the inflation beast, the July consumer price index brought a sigh of relief -- with both core and overall measures coming in below forecasts. Swaps are now suggesting a move of 50 basis points as more likely in September than a repeat of the 75-basis-point increases that officials have opted to implement at their past two meetings.

“This is overall good news for risky assets,” wrote Florian Ielpo, head of macro at Lombard Odier Asset Management, adding that “a lower growth rate of prices does not mean the end of inflation, and naturally the end of hawkish central banking. Inflation remains a situation that requires the Fed’s attention and more importantly the Fed’s measures.”

One danger of the stock-market bullishness right now is it could cause a relaxation of financial conditions that would go against the Fed’s goals. It’s also worth looking back to the early 1980s, when then Fed Chair Paul Volcker eased policy as inflation peaked and the economy tipped into a recession. But the moderation of price pressures proved to be much slower than officials wanted -- and they had to tighten again months later.

In fact, the CPI surprise is just one piece of the intricate puzzle officials are playing with at the moment -- and possibly over the next several months -- with the central bank still miles away from reaching its inflation target. Food prices in the US soared the most since 1979 in July, keeping the cost of living painfully high even as lower gasoline costs offered some relief to consumers.

Two Fed officials responded to softening inflation data by saying it doesn’t change the US central bank’s path toward even higher rates this year and next.

Alluding to market pricing of the policy trajectory, Fed Bank of Minneapolis President Neel Kashkari said it was not realistic to conclude the central bank will start cutting rates in early 2023. His Chicago counterpart Charles Evans said officials will probably continue hiking into next year to bring down “unacceptably high” inflation.

“The easing of financial conditions likely annoys the Fed, and we should not be surprised to see Fed speakers continue to try to talk down the market and risk assets,” said Christian Hoffmann, portfolio manager at Thornburg Investment Management. 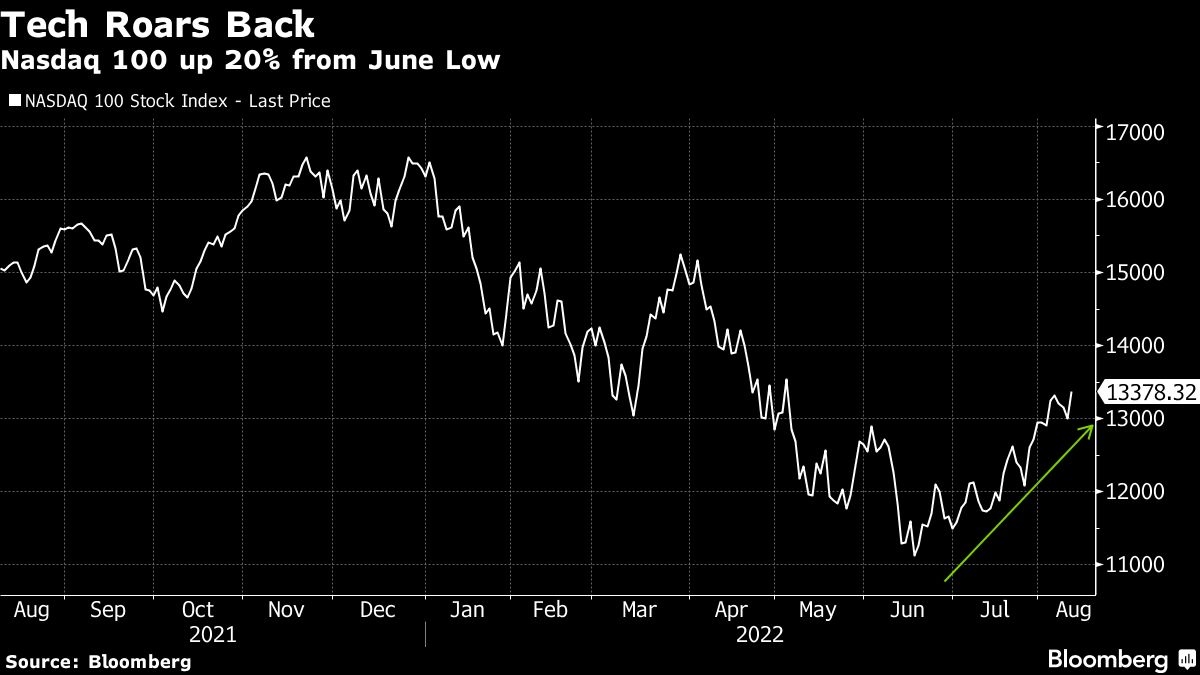 In corporate news, Tesla Inc. climbed after Elon Musk offloaded US$6.9 billion of stock in the electric-vehicle maker to accumulate cash ahead of a trial that could force the billionaire to follow through on an agreement to acquire Twitter Inc. Wendy’s Co. became the latest restaurant chain to show signs of strain thanks to rising inflation as sales and restaurant margin fell short of Wall Street projections.

After the close of regular trading, Walt Disney Co. said it will raise the price of its flagship Disney+ streaming service by 38 per cent. That’s part of a plan to generate more revenue for its money-losing online businesses and build on third-quarter results that beat estimates for sales, profit and subscriber growth. The shares jumped.

Respected for decades for combining decent returns and relatively low volatility, the 60/40 portfolio has generated a 11.5 per cent loss so far this year. Is it time to put the strategy to rest entirely or does it just need a tweak? Have your say in the anonymous MLIV Pulse survey.