Investors could be unwinding their positions after April’s big move: BMO's Belski

Energy, financial and industrials shares led U.S. stocks lower as the pullback centered in the technology sector widened while investors remained on edge over the threat of inflation.

The tech-heavy Nasdaq 100 erased a loss of almost 2 per cent to finish little changed as some dip buyers emerged. The benchmark S&P 500 dropped for a second day after setting a record high on Friday. Treasury yields edged up and the dollar traded near the lowest levels of this year.

Debate rages over whether the expected jump in price pressures will be enduring enough to force the Federal Reserve into tightening policy sooner than current guidance suggests. Fed Governor Lael Brainard said policy makers must show continued patience as distortions in the post-pandemic boom sort themselves out while the economy is still far from the central bank’s objectives.

“I just think that in general there’s this thought that inflation may rear its ugly head,” said JJ Kinahan, chief market strategist at TD Ameritrade. “We see a little bit higher rates, not significantly, but a bit higher rates. And I think this struggle between value and growth also continues at the same time.” 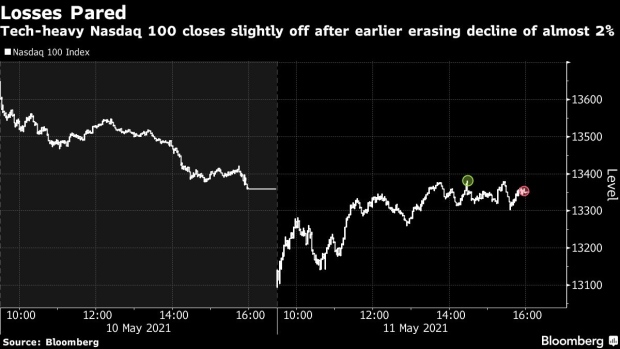 Among the biggest pandemic winners, tech stocks whose valuations often depend on earnings prospects far into the future are now at the center of the inflation debate. That was epitomized in Cathie Wood’s Ark Innovation ETF, which has tumbled about 15 per cent so far this year after surging almost 150 per cent in 2020.

Even after the declines, the Nasdaq Composite trades at 26 times the 12-month projected profits, while the gauge of European technology shares enjoys a valuation of 29 times.

Wednesday’s U.S. inflation report along with a series of U.S. government bond auctions this week are seen as the next factors to deepen or arrest the slide. The latest reading is expected to show an accelerated pace of consumer-price increases, with the year-on-year comparison made starker by the pandemic shock in 2020.

“What’s interesting about tech and the selloff is that it comes in the face of stable yields, a Fed that is likely on hold for a while and some very strong earnings,” said Michael Arone, chief investment strategist for the U.S. SPDR exchange-traded fund business at State Street Global Advisors. “Markets seem to be anticipating some time of move in rates and inflation that could potentially be problematic for the tech and growth trade.”

Copper prices traded near a record, while iron also rallied. Oil rose as fuel shortages are expanding across several U.S. states in the East Coast and South as filling stations run dry amid the unprecedented pipeline disruption caused by a criminal hack.