US stocks posted the biggest daily drop in almost two years as investors assess the impact of higher prices on earnings and prospects for monetary policy tightening on economic growth. The dollar and Treasuries gained amid a pickup in haven bids.

The selloff sent the S&P 500 down four per cent, the most since June 2020, with the plunge in consumer shares surpassing six per cent. Target Corp. tumbled more than 20 per cent in its worst rout since 1987, after trimming its profit forecast due to a surge in costs. Shares of retailers from Walmart Inc. to Macy’s Inc. were caught in the downdraft. The Nasdaq 100 fell the most among major benchmarks, dropping more than five per cent as growth-related tech stocks sank. Megacaps Apple Inc. and Amazon.com Inc. also slid over five per cent.

Cisco Systems Inc., the biggest maker of computer-networking equipment, said it expects revenue to decline in the current quarter, hurt by disruptions stemming from Chinese lockdowns and the Ukraine war. The stock dropped as much as 19 per cent in postmarket trading, the steepest in its history, according to data compiled by Bloomberg.

Treasuries rose across the board, sending the 10- and 30-year Treasury yields down more than 10 basis points. The dollar rose against all of its Group-of-10 counterparts, except the yen and Swiss franc.

The benchmark S&P 500 is emerging from the longest weekly slump since 2011, but any rebounds in risk sentiment are proving fragile amid tightening monetary settings, Russia’s war in Ukraine and China’s COVID lockdowns. 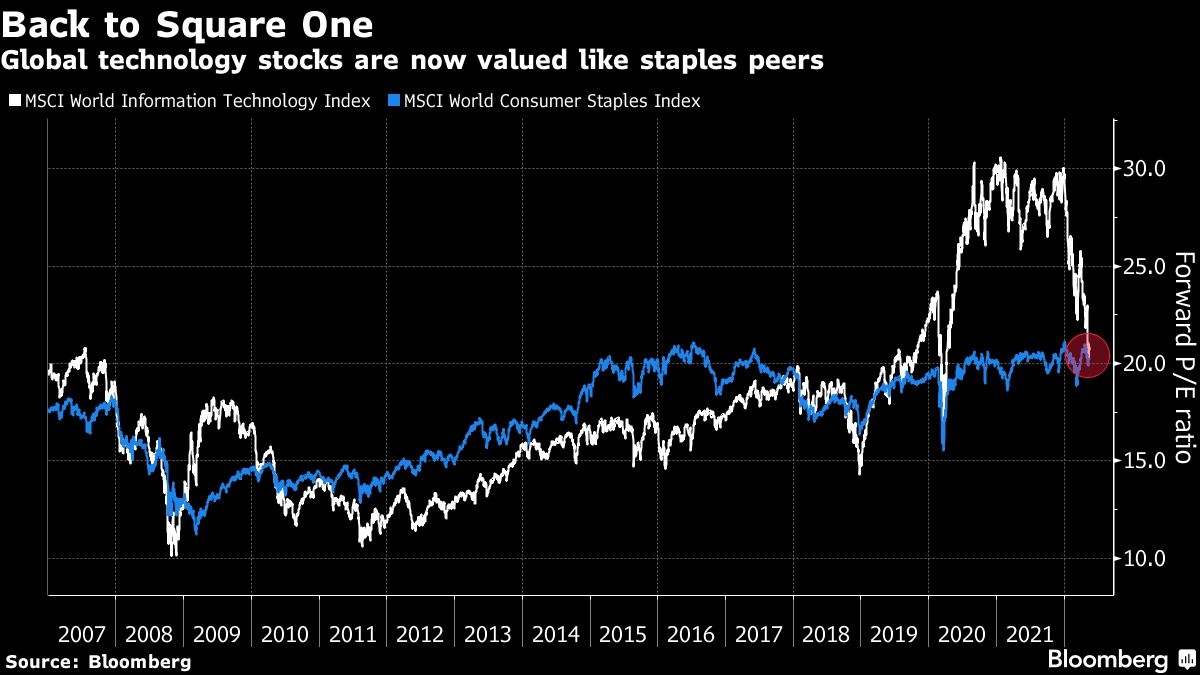 In some of his most hawkish remarks to date, Federal Reserve Chair Jerome Powell said Tuesday that the US central bank will raise interest rates until there is “clear and convincing” evidence that inflation is in retreat. If the Fed raises its key rate somewhat above what it thinks is a “neutral” level for the economy and stops there, that should help bring inflation down from current elevated levels, Chicago Fed President Charles Evan said.

In Europe, new-vehicle sales shrank for a 10th month in a row as the industry remains mired in supply-chain crises, while euro-area inflation plateaued at a record high. Meanwhile, UK inflation rose to its highest level since Margaret Thatcher was prime minister 40 years ago, adding to pressure for action from the government and central bank.

Elsewhere, the Biden administration is poised to fully block Russia’s ability to pay US bondholders after a deadline expires next week, a move that could bring Moscow closer to a default. Sri Lanka, meantime, is on the brink of reneging on US$12.6 billion of overseas bonds, a warning sign to investors in other developing nations that surging inflation is set to take a painful toll.