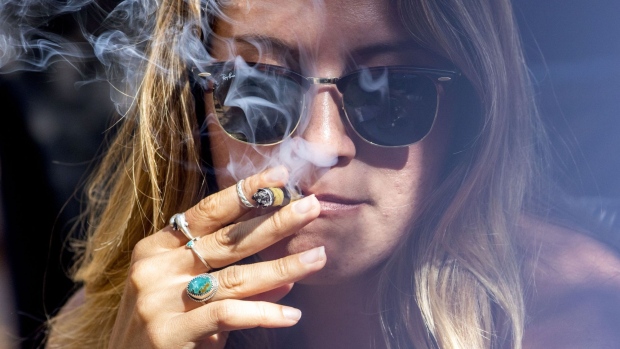 A customer smokes marijuana at the Lowell Cafe, a new cannabis lounge in West Hollywood, California, U.S., on Tuesday, Oct. 1, 2019. America's first cafe to allow the consumption of cannabis offers an extension to the market, where sales are largely confined to dispensaries and online orders, and tests the appetite for a more open and public consumption of a product that's still illegal in many jurisdictions. Photographer: Kyle Grillot/Bloomberg , Bloomberg

(Bloomberg) -- Cannabis use is taking off at the same time that quarantines are reshaping consumer behavior. That could mean big opportunities for other industries looking to capitalize on pot’s growth.

It’s not just snack-food makers that stand to benefit -- though the munchies have indeed led to higher sales in states where recreational use is legalized. A new study from market research firm Mintel suggests a whole new set of cross-promotional cannabis opportunities is on the horizon for companies not put off by the stigma around a federally illegal drug.

“There’s a broader opportunity for media and music companies to connect with consumers and expand past some of the established associations and stereotypes around cannabis,” said Caleb Bryant, an associate director at Mintel involved in the study.

Marijuana users have long been thought of as burnouts listening to the Grateful Dead in their basement. But that image is growing more outdated as the pandemic lockdowns help broaden weed’s audience. In 2020, roughly one in three adults in states with legal recreational cannabis had consumed it in the last three months -- up from 28% the prior year, according to the study, which drew on polls of 2,000 internet users in states where cannabis is legal.

Cannabis is indirectly affiliated with some lucrative markets, like video streaming and gaming. About two-thirds of respondents said they watched television or movies after using marijuana, Mintel found, while 58% listened to music, 46% had snacks, 29% engaged in creative activities and 28% played video games.

Bryant predicts many more cross-promotions between cannabis brands and companies from the entertainment, video game and food industries in the coming years. The market is already attracting big-name celebrities, including Jay-Z, Martha Stewart, David Beckham and Gwyneth Paltrow.

Some companies are beginning to dabble. In 2018, Jack in the Box partnered with Snoop Dogg’s cannabis brand Merry Jane for a $4.20 “Merry Munchie Meal.” In 2017, Netflix partnered with a dispensary on strains ideal for specific shows.

Thus far, the promotional deals have largely been one-off stunts. Much of that has to do with the fact that cannabis isn’t legal at a national level, and companies have to be careful about attracting youth to a drug.

But a non-cannabis brand can be weed-friendly without directly marketing it. Some fast-food companies have held promotions on April 20 -- a reference to 420, a common coded reference to marijuana. For instance, White Castle has offered a meal for $4.20 and at Panda Express you could get four bowls for $20.

Of course, there are some cannabis-related activities that are harder for companies to take advantage of. Mintel’s study found that there was one other popular pastime for those who had just consumed marijuana: 54% of people said they sleep.

“Risks of physical dependence and unpredictable or adverse reactions, resulting in calls to poison control centers, acute intoxication, cyclical vomiting, emergency room visits and anxiety may increase as potency increases,” according to the Senate report, which recommends that the National Institutes of Health intensify its research on the topic and make a recommendation, jointly with the Food and Drug Administration, as to whether states should cap the potency levels of products sold.