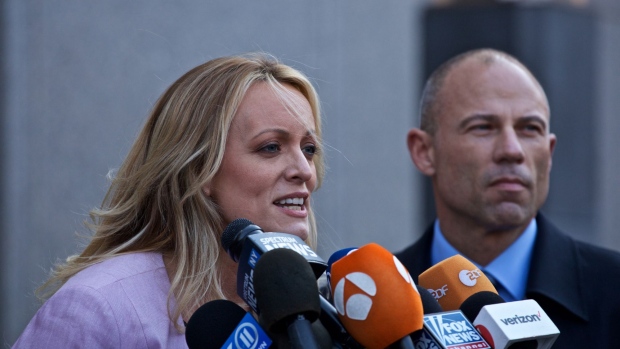 (Bloomberg) -- Adult film star Stormy Daniels’s belief in the paranormal and history of “visions” could come up at the trial of her ex-lawyer for allegedly stealing the advance on her 2018 memoir detailing a claimed tryst with former President Donald Trump.

Michael Avenatti can question Daniels about her beliefs to attack her credibility on the stand, U.S. District Judge Jesse Furman ruled on Tuesday in Manhattan federal court. Daniels, whose real name is Stephanie Clifford, is expected to be the government’s star witness at the trial, which begins on Monday.

Furman rejected federal prosecutors’ request to deem her beliefs off-limits on cross-examination. The judge did block Avenatti from raising her past visits to therapists.

Avenatti shot to fame representing Daniels in an explosive lawsuit against Trump, with whom she claims to have had a sexual relationship a decade before he became president. Daniels sought to invalidate a non-disclosure agreement she signed after receiving a $130,000 hush-money payment. Trump has denied having sex with Daniels.

Prosecutors claim Avenatti stole Daniels’s roughly $300,000 book advance while he was representing her. The former lawyer was separately convicted in 2020 of trying to extort tens of millions of dollars from Nike Inc. and sentenced in July to 2 1/2 years in prison. He’s claimed that prosecution and the conditions of his incarceration were politically motivated.