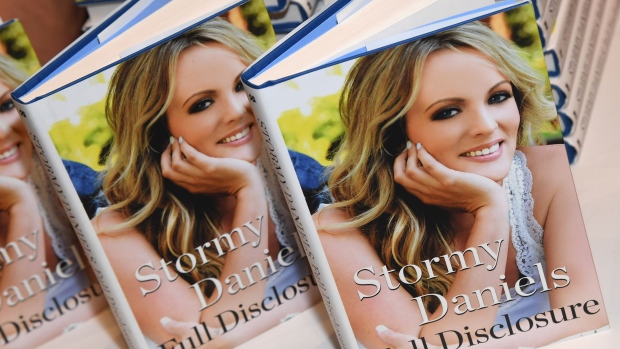 (Bloomberg) -- Pornographic film actor Stormy Daniels told a federal jury that her lawyer in an explosive 2018 suit against then-president Donald Trump stole a chunk of her advance from a lucrative book deal.

Michael Avenatti, on trial for wire fraud and identify theft, stopped representing Daniels in February 2019 “because he stole from me and lied to me” about the book payment, Daniels said Thursday under questioning by a prosecutor in Manhattan.

Daniels, whose real name is Stephanie Clifford, described how she met Avenatti in February 2018 at the Waldorf Astoria hotel in Beverly Hills to discuss hiring him for the suit against Trump, with whom she claims to have had an affair before he ran for office -- a claim Trump has denied.

“I was trying to find out my legal rights and how to get out of a nondisclosure deal,” she said, referring to a $130,000 hush money agreement she struck with Trump just before the 2016 presidential election.

The trial represents a remarkable split for a lawyer-client team who shot to national prominence with their claims against Trump. Avenatti will personally cross-examine Daniels, having ditched his own lawyer after the trial started.

At the start of the trial on Monday, Avenatti’s lawyer said in an opening statement to the jury that his client signed an agreement with Daniels allowing him to take a cut of any future book deal.

During her testimony, Daniels read from her contract with Avenatti, including that he would be “entitled to a reasonable percentage to be agreed upon by client and attorney.”

“At any point, did you and the defendant ever agree that the defendant would get any portion of a book or media opportunity?” Assistant U.S. Attorney Robert Benjamin Sobelman asked her.

Read More: Trump Foes Turn on Each Other in New Avenatti Criminal Trial

Daniels, who struck an $800,000 book deal with St. Martin’s Press, testified that Avenatti told her he “would never take a penny from my book” because he said I was “courageous and deserved it.” He is accused of stealing $300,000 of the advance.

Daniels testified she paid Avenatti a token $100 in cash in 2018 to represent her, which the lawyer used to pay for their lunch at a restaurant in Los Angeles. She gave him permission to launch a legal defense fund in her name, which eventually raised $650,000 that Avenatti controlled, she said.