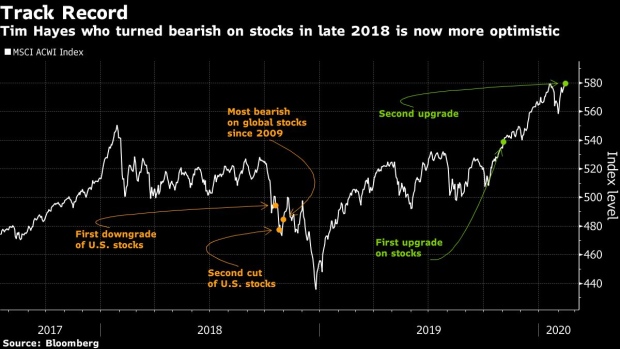 The chief global investment strategist at Ned Davis Research raised the recommended allotment for stocks by 5 percentage points to 55%, in line with the level the firm considers its normal allocation for the first time in more than a year. Investors should put 40% of their money into bonds and keep the rest in cash, he said.

The upgrade is the second in three months for Hayes, who has cited continued outperformance in equities and improvement in manufacturing data as reasons for bears to reconsider their cautious stance. While things have turned in favor of bulls, Hayes still isn’t convinced it’s time to go all in.

A concentrated market where U.S. stocks, in particular tech giants like Apple Inc., have dominated the latest advance is topping his worry list. Adding to the concern is an inverted yield curve, where rates on short-term bonds are higher than those on longer-dated debt, a condition that Hayes says would hurt future economic growth.

“There is currently enough trend and breadth improvement to return the equity allocation to market weight and reduce the overweight bond allocation,” Hayes wrote in a note to clients. “But considering the excessive optimism and stretched valuations, there is currently insufficient confirmation to conclude that equities are off and running into a lasting cyclical bull market.”

Investors who followed his advice would have been spared some pain in 2018. In October that year, Hayes downgraded U.S. equities twice, saying that the global bear market was worsening. While stocks rallied in the following month, he warned against chasing the market and turned bearish on stocks for the first time since the start of the bull market in 2009. The MSCI All-Country World Index dropped 13% in the fourth quarter of 2018, the worst decline in seven years.

Since then, stocks have bounced back, helped by Federal Reserve monetary stimulus and easing U.S.-China trade tensions. The MSCI world gauge has gained 20% in the past year, compared with a 6.5% increase in the Bloomberg Barclays global Aggregate Bond Index.

Almost all the outsize gains from stocks, however, came after October. Hayes started rolling back his pessimism in November.

While stocks have rebounded, the relative performance to bonds has yet to reach a new high, a sign to Hayes that the equity momentum isn’t confirmed on charts. The gains also are so narrowly focused that only 22% of the world’s major markets are within 5% of record highs, Ned Davis data showed.

Investors wary of a slowing economy have flocked to U.S. tech megacaps for safety. The Nasdaq 100 Index has climbed 10% this year, more than triple the gain in the MSCI world benchmark. Apple, Microsoft Corp. and Amazon.com Inc. -- each topping $1 trillion in market value -- account for 7.4% of the global index, a share that according to Ned Davis exceeds all other 48 markets represented.

It’s “reminiscent of the narrowing technology-led run-up of 1999,” Hayes wrote. “Continued concentration would suggest that what’s underpinning the stock market is less an improving macro outlook than ‘FOMO,’ the fear of missing out on the apparently endless ascent of the megacaps.”

To contact the editors responsible for this story: Brad Olesen at bolesen3@bloomberg.net, Richard Richtmyer, Rita Nazareth