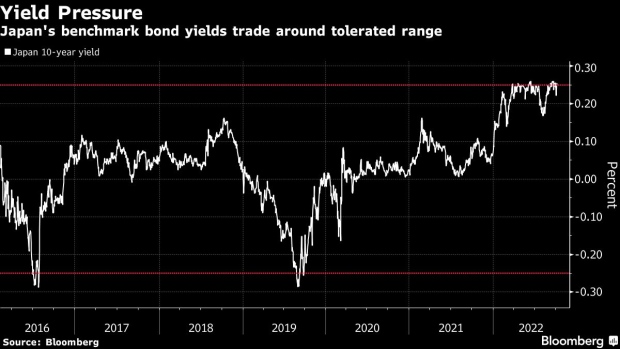 (Bloomberg) -- The last anchor to the world of rock-bottom interest rates is stubbornly refusing to lift, but that’s not stopping strategists from warning of the shock to global markets when the Bank of Japan finally decides to tighten policy.

A BOJ policy tweak would bolster the yen and deal a sizeable blow to bond markets where Japanese investors have significant holdings, namely Australia, France and the US, according to UBS Group AG. For the Swiss bank, a more extreme -- though unlikely -- yield-curve control abandonment would send Japan’s stocks into a bear market and may lop 10% off US and European shares.

Investors best be prepared: the BOJ’s grip on yields is entering its ‘final chapter,’ according to JPMorgan Chase & Co., while Standard Chartered reckons rising inflation is paving the way for the world’s last prominent dove to capitulate.

“Given how Japanese government bond yields have been an anchor for global fixed income, the reverberations of a policy change are likely to echo far and wide across global assets,” UBS strategists including Rohan Khanna wrote this week. “Markets most impacted by BOJ policy change would be the ones where Japanese investors’ footprint is largest.”

The BOJ’s resolute insistence on keeping rates low despite aggressive hikes from global peers has sent local investors abroad in the search for yield, and pummeled the yen. An about-turn now could turbocharge a yen rebound, give an extra impetus to the selloff in bond markets worldwide and trigger a wave of money flowing back toward Japan out of foreign holdings like Treasuries.

While an imminent policy shift is not on UBS’s radar, a team at the bank ran through the potential consequences of a surprise move as part of a note responding to the “toughest client questions” this week.

For example, raising the upper limit of the BOJ’s iron-clad grip on 10-year yields would “help wipe out speculative yen shorts” and aid in strengthening the currency to 130 against the dollar, it said. And while not a base case scenario, the BOJ abandoning its cap entirely could see a spike in US mortgage-backed security yields that outpaces that of benchmark JGBs thanks to the large amount of them held by Japanese investors.

JPMorgan said a change may come sooner than some might think as the BOJ faces two “irreconcilable problems”: maintaining functionality of the world’s second-biggest bond market while avoiding rapid yen losses as Japan’s monetary policy diverges from peers.

Governor Haruhiko “Kuroda’s dovish guidance runs at odds with the BOJ’s own forecasts of rising price pressures,” economist Ayako Fujita wrote in a recent note. “This policy mix is inherently unsustainable; it is entering its final chapter.”

The firm brought forward its forecast for yield-curve control change to March next year from mid-2023.

Still, UBS also cautioned that the fear of making a mistake by tightening policy into a global downturn would likely stay the BOJ’s hand for the next two years.

“The market will not be able to ‘force the BOJ’ into moving,” the strategists said.

But for Standard Chartered’s Steve Englander, rising prices in Japan may combine with pressure from financial markets and lead to a BOJ tweak.

“While the urgency for a YCC policy shift may need to come from higher global rates and resulting yen weakness, the recent pick-up in Japan’s inflation and inflation expectations may provide a supportive backdrop for such a policy shift if the need arises,” he wrote Tuesday.