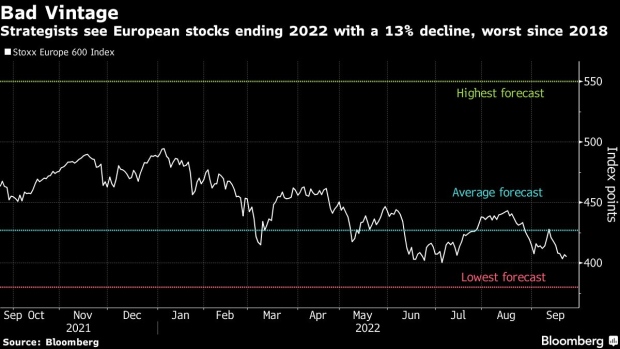 (Bloomberg) -- Strategists are giving up on a year-end rally for European stocks.

Forecasts for the Stoxx 600 Index have fallen by about 5% in the past month, according to the average of 16 estimates in a Bloomberg survey. Strategists now see the benchmark ending the year at 427 points, implying gains of less than 5% from Wednesday close. Using the median view of 418, the potential upside is even smaller.

Strategists’ dimming outlook comes at a tough time for a region that’s grappling with soaring inflation, a hawkish central bank, an energy crisis and recession fears. Nine of the firms surveyed lowered their forecasts since August’s poll and based on the current average, the index is headed for an annual drop of 13%. That would be on par with 2018, one of the worst years in more than two decades.

“The sustainability of any rally is challenged in the current environment by the fact neither policy nor fundamentals are expected to improve soon,” said Barclays strategists led by Emmanuel Cau. They cut their Stoxx 600 target to 390 from 465 this month, bringing them into line with peers from Bank of America Corp. and Goldman Sachs Group Inc.

While strategists are turning increasingly bearish, analysts keep raising earnings forecasts, which have soared nearly 20% this year. Meanwhile, price targets have started to get cut, but at a very slow pace. Analysts on average see 31% returns for the Stoxx 600 over the next 12 months.

The Stoxx 600 fell 1.5% on Friday, bringing total declines from a January record high to 20% and setting it up for a bear market close. The European equity benchmark is the last major regional index to cross this threshold after German DAX and the Euro Stoxx 50 closed in bear territory in March, and the S&P 500 followed in June.

Bank of America strategists had reduced their goal the month before on the prospect of an accelerating economic contraction. “We expect the drag from weaker growth to outweigh the boost to equity multiples from falling real bond yields, as central banks’ focus shifts from inflation worries to growth concerns,” BofA’s Milla Savova said in written comments this week.

According to peers at Goldman Sachs, the European equity market on average reaches a trough when stocks hit a forward price-to-earnings multiple of 9.5 times, 13% below the current level.

Investors are taking a similarly pessimistic view. According to Bank of America’s September fund manager survey, allocations to euro-area equities have fallen to a net 42% underweight, the lowest reading on record. Meanwhile, stockholders have withdrawn $81 billion from the region’s equity funds in 31 consecutive weeks of outflows, the longest streak since 2016.

Still, not everyone takes a negative view. JPMorgan Chase & Co. strategists led by Mislav Matejka are among those who are more optimistic about the region.

“Earnings could be acting better than typical, and a potential recession might be shallow,” Matejka wrote in a note this week, also pointing to fiscal stimulus measures, the potential for lower gas prices and a big valuation discount to the US as potential positives.