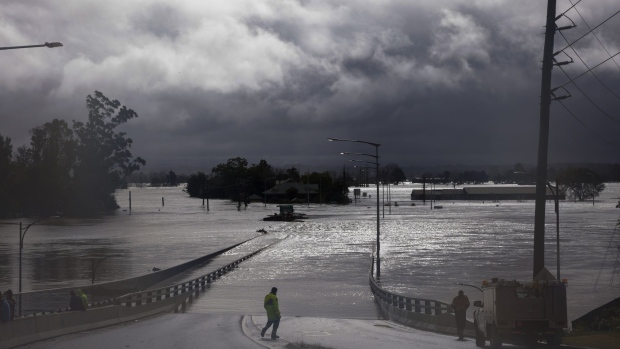 SYDNEY, AUSTRALIA - JULY 04: People view the flooded Windsor Bridge along the Hawkesbury River in the suburb of Windsor, on July 04, 2022 in Sydney, Australia. Thousands of residents were forced to leave their homes overnight and a number of evacuation orders are in place across Sydney as heavy rain and flooding continues. (Photo by Jenny Evans/Getty Images) , Photographer: Jenny Evans/Getty Images AsiaPac

The MV Portland Bay, which has been without power since early Monday, has been off the coast of New South Wales state since leaving Port Kembla, as Australia’s east coast has been lashed by days of strong winds and rain.

Poor conditions on Monday night hampered attempts by tugboats to tow the 170 meter ship to deeper water, New South Wales Port Authority chief executive Phillip Holliday told the Australian Broadcasting Corp. Cables between one of the tugboats and the ship snapped in the bad weather.

The ship is now further north and may not be able to be towed into Port Botany until Wednesday, Holliday said.

The MV Portland is carrying about 1,000 tonnes of fuel oil, the Sydney Morning Herald reported, raising concerns of a possible ecological disaster should the ship crash into the rocky coastline of the nearby Royal National Park.

Evacuation orders and flood warnings remain in place for several river-adjacent areas on the outskirts of Sydney, as it is lashed by NSW’s fourth major flooding incident in the past 18 months. Rain is expected to ease on Wednesday for central parts of the state’s coast, the Bureau of Meteorology said.