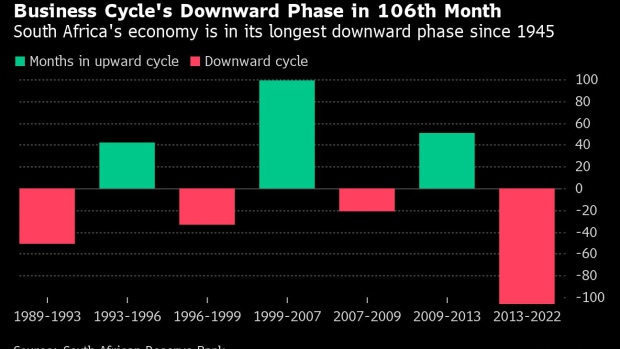 (Bloomberg) -- South Africa’s work days lost due to strike action rose more than 30-fold in the six months through June compared with the same period a year earlier, driving up wage settlements between labor unions and companies.

Africa’s most industrialized economy lost 1.6 million work days due to industrial action in the first half of 2022, up from 45,000 in the prior year, data in South African Reserve Bank’s Quarterly Bulletin published Tuesday show. The figure is calculated by multiplying the number of employees on strike with the days they were absent from work, the central bank said in response to emailed questions.

The increase in working days lost, particularly in the second quarter, was driven by a prolonged wage-related strike at a large gold-mining company, the central bank said. About 31,000 workers at Sibanye Stillwater Ltd.’s three gold mines in South Africa embarked on a three-month strike for higher wages from early March. The protests hit the producer’s gold output, which slumped 63% year-on-year in the six months through June.

Dissatisfaction over pay was the biggest cause of industrial action in the second quarter, accounting for 99% of work days lost and 85% of strikes, the central bank said, citing data from Andrew Levy Employment Publications. That drove the average wage settlement rate agreed through collective bargaining up to 6.1% in the first half of 2022, from 4.5% a year earlier, it said.

“Despite the increase, the average wage settlement rate was still below the average headline consumer price inflation rate of 6.2% in the first half of 2022,” the central bank said.

State power utility Eskom Holdings SOC Ltd.’s one-year pay raise of 7% agreed with striking workers in July prompted a warning from S&P Global Ratings that it could set a dangerous precedent for on-going public-sector wage negotiations that may add to price pressures. South African civil servants said Monday that they’re preparing to reject a government wage offer, raising the prospect of the first major strike by state workers in more than a decade.

The central bank’s monetary policy committee has responded quicker and faster than most other central banks to the worst global inflation shock in a generation and signaled after hiking the benchmark interest rate for a sixth-straight meeting last week that it remains prepared to act with urgency to fight persistent high prices. Governor Lesetja Kganyago has previously said the MPC would be concerned about economy-wide pay settlements that are consistently above inflation expectations as that may prompt a wage spiral.

The economy shrunk in the second quarter and is now smaller than it was before the coronavirus pandemic struck as the strikes, severe flooding and heightening power outages weighed on output. South Africa remains stuck in its longest downward cycle since World War II, with economy entering its 106th month of a weakening cycle in September, according to central bank data.

The current downward phase has lasted about twice as long as the last major weakening phase between 1989 and 1993, when the apartheid government renewed a state of emergency and the country prepared for its first democratic elections. The central bank is working to determine whether a turning point in the cycle has already been reached and it has plans to publish the results in the Quarterly Bulletin scheduled for December, it said in an emailed response to questions.