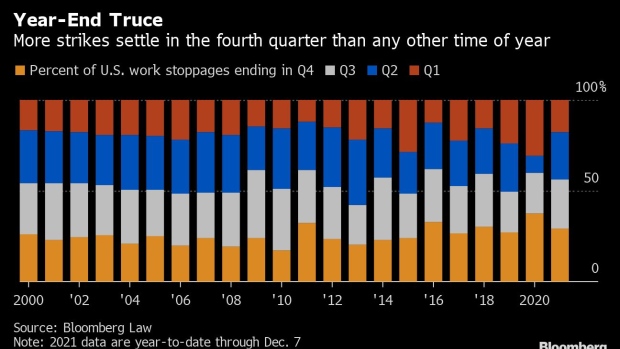 Demonstrators during a union workers strike outside the Kellogg plant in Battle Creek, Michigan, U.S., on Friday, Oct. 22, 2021. Members of the Building and Construction Trades Council union will return to work Tuesday at the Kellogg Co. cereal factory in Omaha, Nebraska, while the broader strike against the company continues. , Bloomberg

(Bloomberg) -- The holidays are a time for peace and good will—including at the bargaining table, it seems.

Unions and employers are the most likely to settle a strike in the fourth quarter than at any other time of year, according to Bloomberg Law’s database of work stoppages. In 2020, nearly 38% percent of strikes were settled between October and December. This year, the fourth quarter has already seen the most agreements of any quarter, and there are still about three weeks left in the calendar year.

Among this quarter’s high-profile settlements was the end to a four-week strike at Deere & Co.’s U.S. plants. A strike at Kellogg Co.’s cereal plants is ongoing heading into the quarter’s final weeks.

In five of the last six years, the fourth quarter was the No. 1 period for strike settlements. (In 2019, it was tied with the second quarter.) That could be because unions and employers are less eager to fight around the holidays. Unions don’t want to leave their members without a salary around year-end celebrations, while businesses may not want to close their books for the year on a bad quarter, Bloomberg Law legal analyst Robert Combs said.

Some of it, though, is just the calendar at play: Many contracts are slated to expire in the second part of the year, meaning deals are often reached then, holidays or not.

“Almost all union work stoppages happen during renegotiation periods, which are common leading up to the end of the calendar year—a traditionally popular time to set the expiration date for a contract,” Combs said. “Because about two-thirds of all strikes last less than a month, it makes sense that most strikes are going to begin, and end, in the later part of the year.”