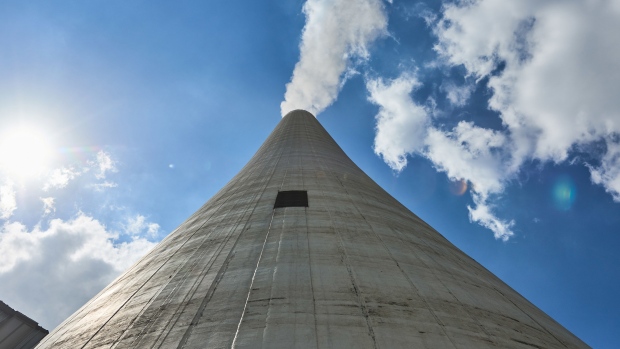 Vapour rises from a chimney at the Eskom Holdings SOC Ltd. Tutuka coal-fired power station in Mpumalanga, South Africa, on Thursday, Nov. 18, 2021. South Africa's energy department has said it will start preparing for the end of coal-for-power use in the country but cautioned that a retreat from the dirtiest fossil fuel must take account of the impact on the economy and the people who depend on it for a living. Photographer: Waldo Swiegers/Bloomberg , Bloomberg

The Frontier fund said Wednesday that it had selected six startups to receive grants or pre-purchase agreements — essentially, advance payments for carbon removal in the future — from the fund. It’s the first set of commitments from the fund, which has raised money from Stripe Inc., Meta Platforms Inc., Alphabet Inc., Shopify Inc. and McKinsey & Co. The fund debuted earlier this year and grew out of similar carbon-removal purchase programs at Stripe and Shopify.

Many climate efforts are focused on reducing emissions, but in order to combat climate change, carbon also must be removed from the air and stored in a long-lasting way, such as capturing atmospheric carbon and burying it deep in the earth. The technology to do so is still in its infancy, and the processes are prohibitively expensive. Over time, improvements could bring volume and cost-efficiency, but in order for that to happen, the companies trying to develop carbon removal need a jumpstart.

The goal of the effort is to create a market for carbon-removal technology at scale. The bulk of the $925 million is intended to pay for the carbon removal after it’s completed — so-called offtake agreements. To start, however, the fund is paying smaller companies before they’ve even begun. So far, only Stripe is paying for those pre-purchase agreements, while the other participants in the fund can choose whether they want to do so or wait for the companies to mature.

For this first round, a group of 19 experts looked at a pool of 26 applicants and selected six companies, which hail from the US, the UK, Australia and Israel, and which focus on direct-air capture, enhanced rock weathering and synthetic biology. Stripe will be the first customer for each of them. The payments processor has committed to spend $2.4 million buying carbon removal from those six companies, and has set aside another $5.4 million for future purchases from the same set.

The fund’s overseers  said they were heartened by the diversity and creativity among the applicants, but they also recognized just how minuscule the current capacity for carbon removal is compared with the eventual scale needed to meet climate goals. Experts predict that by 2050, 6 billion tons of carbon must be removed from the atmosphere each year; so far, only about 10,000 tons have been removed in all. The pre-purchase agreements are buying  hundreds of tons each.

“On the one hand, there’s been a huge amount of momentum, and at the same time, there's not enough momentum,” said Nan Ransohoff, head of climate at Stripe. “There’s a very big gap between those two numbers.”

Three of the companies — AspiraDAC, Calcite-Origen, and RepAir — are developing direct-air capture technology, which uses machinery to filter CO₂ out of the air. These new methods include some options to use electricity rather than heat during the process, which would allow for eventually powering the capture using renewable sources. Two others — Travertine and Lithos Carbon — are finding ways to speed up the natural process by which mineral weathering captures carbon dioxide from the air. And a final company, Living Carbon, is receiving a research and development grant to synthesize a component of algae to sequester CO₂.

The fund will select another round of companies to buy from in the fall. The hope is to send a clear message to anyone considering founding a startup to attack this problem: If you build something promising, you’ll have buyers. Ransohoff hopes that the missive will be received quickly, even if the technology takes several years to develop before it can remove significant amounts of carbon from the air. “I think it's unrealistic for everybody to start to see huge volume in the next few years,” she said. “We have to be both patient and impatient at the same time.”