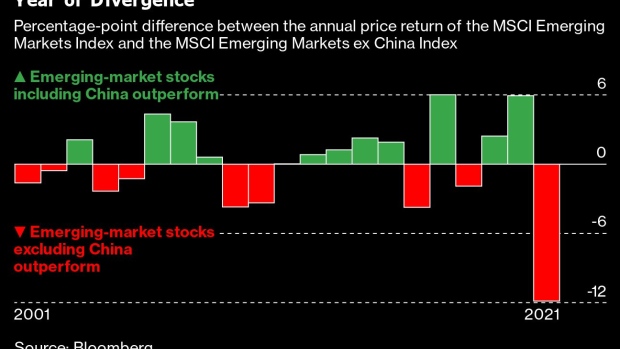 (Bloomberg Markets) -- As Grantham, Mayo, Van Otterloo & Co.’s emerging-market team talked with one of their biggest clients in early 2021, a question arose: Would it be possible to take China out of an ­emerging-market stock portfolio?

It was an unusual query. Representing one-third of the MSCI Emerging Markets benchmark and half of the member companies, China is almost synonymous with emerging-market investing.

But it was an unusual time. The U.S.-China relationship was at the lowest point since the Cold War. The trade war was still rumbling, Congress had passed a law threatening to kick hundreds of Chinese listings off the U.S. exchanges, and sanctions against Chinese companies over issues from human rights to military ties had become routine. Inside China, regulators had pulled Ant Group Co.’s blockbuster initial public offering at the last minute, the start of an unprecedented regulatory crackdown.

At the same time, Beijing was steadily removing barriers to the world’s second-largest stock and bond markets. An unprecedented amount of foreign capital was pouring into China.

The GMO client, which asked to remain anonymous, had invested in funds dedicated to China and didn’t want more exposure from its emerging-market funds. So GMO, co-founded by famed value investor Jeremy Grantham, built an emerging-market portfolio for the client without a single Chinese company. By October the boutique investment firm had set up a fund focused on emerging-market assets, excluding China.

“The number of conversations on this topic is dramatically higher than it was two, three years ago,” says Binu George, a GMO strategist and a 30-year investment veteran. “Right now we are in the beginning of the separation stage.”

In financial centers such as London, New York, and Beijing, investors are increasingly deciding that China is too big and too different to be lumped with developing countries such as Poland and Pakistan. While China has long stood out in the developing world for its unique combination of size, growth, and market depth, the issue has become more urgent in a year when geopolitical and regulatory risks helped wipe out more than $1 trillion in market valuation from U.S.-listed Chinese stocks.

“Based on our conversations, many investors are ­contemplating whether to separate China from the rest of their ­emerging-market equity allocation,” Goldman Sachs Group Inc.’s ­strategists, including Sunil Koul and Timothy Moe, wrote in an October report. Last year six investment firms—GMO, DFA Investment, BlackRock, Amundi, Eastspring, and Baillie Gifford—launched emerging-market stock funds that excluded China, compared with two firms in each of the previous two years, according to data compiled by Bloomberg.

Inflows to the once thinly traded iShares MSCI Emerging Markets ex China ETF exploded to $1.9 billion in 2021 from a total of just $132 million in the prior three years. Vanguard Group, manager of the world’s largest emerging-market stock fund, plans to start a China fund, its first-ever U.S. domiciled fund that offers exposure to a single foreign country, early this year.

The separation is similar to Japan’s split from broader Asia funds at the turn of the century. At the time, Japanese stocks accounted for almost three-quarters of the regional Asia stocks benchmark. Since then, Japan and Asia ex Japan strategies have become standard.

Since 2001, when the MSCI Asia ex Japan Index was created, Japan and the rest of Asia outside China received net inflows at “a fairly consistent” proportion of 60% to 40%, suggesting there is “no cannibalization effect,” according to the Goldman Sachs report in October. Meanwhile, the correlation of foreign flows to Japan and the rest of Asia declined from more than 70% in the early 2000s to a range of 10% to 20% before the pandemic started in 2020, suggesting that “investors will consider each market on its own merits,” the report added.

Like Japan in the 2000s, China is poised to become even more dominant in coming years, with more onshore stocks joining emerging-market benchmarks.

“Most people who have large plans and large allocation will want to have a look at China as an asset class,” says Virginie Maisonneuve, chief investment officer of global equities at AllianzGI, who set up her first China fund for institutional investors in the 1990s.

It’s not just equity investors. Cary Yeung, head of Greater China debt at Pictet Asset Management, says clients traditionally included Chinese bonds within a broader emerging-markets portfolio. But the situation has “evolved rapidly” in recent years, with more investors considering a separate allocation. In the foreign exchange market, HSBC Holdings Plc has called for adding the yuan to the so-called Group of 10 currencies, alongside the dollar, euro, and yen, because of the Chinese currency’s growing influence.

Chinese assets are diverging from emerging markets because of the country’s unique economic cycle, political agenda, and growing tension with the U.S. And while investing in developing markets always teems with idiosyncratic risks, China’s huge size means it’s overwhelming the performance of other markets.

Over the past decade, the performance of the largest 200 actively managed emerging-market funds is about 90% correlated to the annual returns of the MSCI China Index, according to the Goldman Sachs report. Separating China from emerging-market funds could help investors better control their risk exposure.

The shortcoming of the current setup was exposed in 2021. The MSCI China Index plummeted 23% in dollar terms, its worst performance since the financial crisis. The drop was in reaction to Beijing’s crackdown on industries from after-school tutoring to food delivery, as well as the delisting threat from the U.S. China’s plunge sent the MSCI emerging-market benchmark down 4.6% in 2021. But excluding China, the developing-country index returned 7.3%, its biggest outperformance ever.

“China has its own monetary and macro cycles that are not really in sync with the rest of the world,” says Ivan Xie, manager of the $1.6 billion Fidelity China Region Fund. “So that requires you to have more local knowledge. Having two asset classes—China and EM ex China—gives you another layer of flexibility, from the asset allocation perspective, to manage your country risk.”

“The number of securities and investment opportunities just far outweigh the rest of emerging markets combined together,” says Chia, whose previous job at MSCI Inc. included helping the index provider to add China’s onshore A-shares to its benchmark.

Investors who gained exposure to China through ­emerging-market funds and Asia ex Japan funds are increasingly seeking dedicated Chinese funds, according to Zhen Wei, managing director of APAC Index Solutions Research at MSCI. “More people are saying: ‘We are not touching our EM allocation, but we should allocate more to standalone strategies,’ ” he says.

Stripping China out will cut the number of stocks in the emerging-market benchmark by half. An ex China universe will also lose about 50% to 60% of the liquidity, according to GMO’s George. On the positive side, Goldman’s strategists say the declining correlation between China and the rest of emerging markets provides greater diversification for investors.

“China is very large and will grow larger, and there’s a huge number of stocks that are not picked up by the benchmark,” George says. “For all these reasons, it’s worth my trouble to treat China separately.”