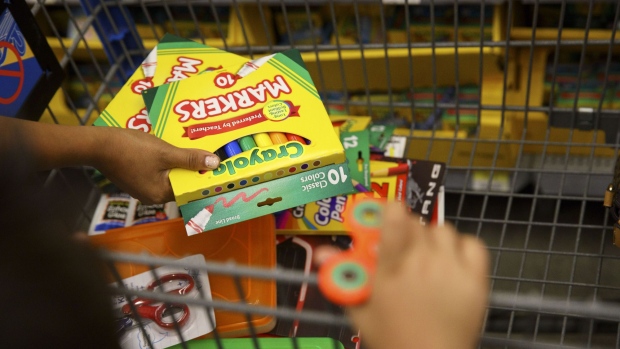 (Bloomberg) -- The back-to-school shopping season has kicked off strongly, offering some relief amid concerns about US consumer resilience, according to Bank of America Corp.

Spending on school items, including for college, is expected this year to hit a record high of $111 billion, a 1% increase over last year, according to National Retail Federation data cited by Bank of America Institute economists led by Anna Zhou.

Trends show consumers are stocking up earlier this year as price-conscious shoppers look to lock in the best deals, the economists wrote. That shift could be positive for consumer spending in July, but it puts “downward pressure to spending in August,” as purchases might have been pulled forward, they said.

The findings suggest US consumers remain resilient despite high inflation and the looming fear of recession. Shoppers are expected to spend a record amount this school year due to the higher prices and economic conditions, according to a survey by Deloitte LLP.

The back-to-school shopping period is important for retailers looking to boost sales amid weakening demand for goods and concerns about overall consumer health. Competition has also heated up with Amazon.com Inc.’s midsummer Prime Day sale.

Consumers also shopped earlier during the past winter’s holiday season to secure better deals and avoid potential delays due to lingering supply-chain issues, Bank of America Institute said in the report. Like last year, e-commerce is also likely to play a key role. The study found that 39% of clothing and 62% of electronics spending was done online between July 1 and August 6.