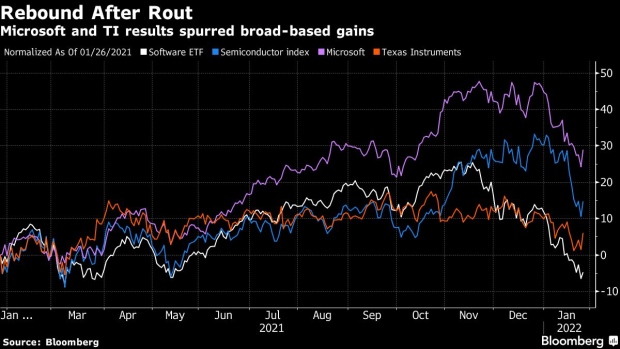 Microsoft gained as much as 6.9%, the most since April 2020, after it gave a forecast for its cloud-computing business that analysts see as strong. Wall Street firms also welcomed the outlook given by Texas Instruments, which lifted shares as much as 5.3%. The reports were among the earnings season’s first high-profile reads into the software and semiconductor sectors, respectively, and they spurred broad rallies into the beaten-down groups.

Mizuho Securities wrote that given the recent weakness in tech stocks, the reports from Microsoft and Texas Instruments represented a test for the market that the companies “passed with flying colors.”

The iShares Expanded Tech-Software Sector ETF rose as much as 3.2%, while the Philadelphia Stock Exchange Semiconductor Index gained 4.1%. Both have come under heavy selling pressure in recent weeks, amid concerns over valuation and the prospect of higher interest rates, an issue the Fed is expected to speak to this afternoon.

The software exchange-traded fund remains down more than 20% off a November peak, while the chipmaker index is down almost 14% off a peak hit last month.

Matthew Maley, chief market strategist at Miller Tabak + Co., wrote that Microsoft’s report “was just what the doctor ordered,” providing support to major tech names that were “quite oversold” in his view. “We’ll see if these earnings reports can be a catalyst for a bounce that lasts for more than just a few days,” he adding, noting names like Apple Inc. are scheduled to report later this week.

Notable advancers in the chipmaker space include Nvidia Corp., Marvell Technology Inc., Broadcom Inc., and Qualcomm Inc., all of which rose more than 3%.