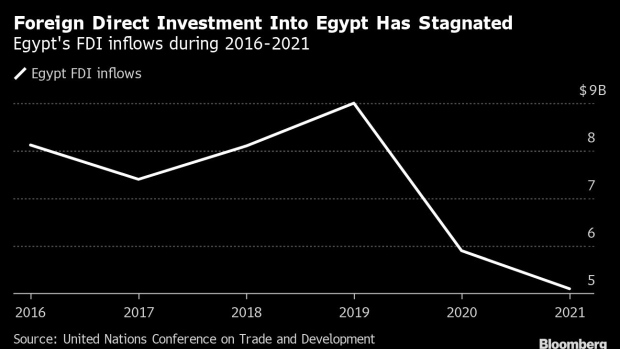 (Bloomberg) -- Egyptians are finding some consumer goods increasingly hard to come by, as attempts to buffer the currency ripple across the $400 billion economy that’s running short on dollars.Although basic commodities are freely available, shortages in more luxurious products -- ranging from summer clothes to imported cars -- are becoming common. Choices for customers have dwindled at fast fashion groups like Mango, Zara and H&M.

When it comes to food imports, some brands of breakfast cereals, chips and beef hot dogs to varieties of pesto sauce and lasagna can go out of stock or prove difficult to find, shoppers contacted by Bloomberg said.

It’s a distant rumbling of policies deployed six months ago, stiffening oversight of imports and as a result choking off demand for hard currency. As a cascade of side effect spreads across Egypt, the government has had to take other steps to shore up its finances and held talks with the International Monetary Fund on a new program.

EGYPT INSIGHT: Devaluation, Not Default, to Fill the Funding Gap

Goldman Sachs Group Inc. estimates Egypt may need to secure a $15 billion package from the IMF to meet its funding requirements over the next three years, though the government is asking for a smaller amount. That’s in addition to pledges of more than $22 billion in deposits and investment from Saudi Arabia, the United Arab Emirates and Qatar.

“There is a shortage of foreign currency in the country,” said Farouk Soussa, an economist at Goldman in London. As evidence, he cited the deterioration in the net foreign assets of lenders and the central bank’s declining reserves.

The most populous Arab nation and one of the world’s biggest importers of wheat,  Egypt was among emerging economies vulnerable to the shocks that ripped through commodities markets after Russia invaded Ukraine. A wave of inflation and market upheaval unleashed by the war has contributed to its worst foreign-exchange crunch since a dollar shortage half a decade ago prompted a pound devaluation and eventually led to a $12 billion IMF loan.Read: War-Driven Race for Food and Gas Converges on Linchpin Egypt

But the timing of its efforts early in the year to throttle imports lays bare how Egypt’s courtship of portfolio investors, combined with a struggle to attract enough longer-term foreign capital, left the country exposed when the conflict in Europe hit closer to home.

More than a decade of entrenched current-account deficits has contributed to a reliance on volatile flows into local securities to finance the chronic shortfalls.

Foreign direct investment, long touted as a priority by authorities, has meanwhile stagnated after a brief pickup. Egypt’s policies kept the pound largely stable following its 2016 devaluation -- until the central bank allowed it to weaken sharply in March. On Tuesday the pound fell past 19 per dollar in the offshore market for the first time since January 2017. That brought it roughly 3% away from 2016’s all-time low, according to data compiled by Bloomberg.EGYPT INSIGHT: How Far Should Devaluation Go? About 23%

The government said in May that foreign investors had pulled some $20 billion from the local debt market since the start of this year. The central bank’s net reserves, which have been growing since mid-2020, dropped in three of the past four months.

To cool off demand for dollars, Egypt went ahead with an approach that’s now taking the blame for gaps in the supply of some products. From February, authorities began to require importers to secure a so-called letter of credit from their banks to be able to buy goods abroad.

An official at a major Egyptian distributor of foreign consumer goods said its imports plummeted from a monthly total of around $25 million to around $1 million in the four months after the introduction of the new rules. The person -- who asked not to be identified-- said all of the company’s imported goods are now out of stock.

The predicament of another Egyptian firm that imports cars is even worse. It hasn’t received a single approval to ship vehicles from abroad since the end of March, according to a company official. Read More: Egypt FX Market Adjustment Was Necessary: CBE Governor

While the new rules exempted a number of essential products from medicines to some food items and only applied to transactions exceeding $5,000, the new procedure was more complex than before, raising costs and causing delays for businesses.

A drop in import approvals eventually prompted President Abdel-Fattah El-Sisi to issue additional exemptions for raw materials and intermediary products, partly in an attempt to stimulate local production. The decision freed up dollars for those goods.

Individual account holders can also generally buy foreign currency from banks for planned travel, although lower limits have been imposed since March. No strict curbs are in effect on credit card transactions overseas.

Egypt’s currency management is now probably a critical focus of its discussions with the IMF, said Carla Slim, an economist at Standard Chartered Plc.

The Washington-based lender “will most likely make exchange-rate flexibility a priority,” she said. That was already among its calls after March’s devaluation, and the IMF has also urged deeper reforms.

Egypt is likely days, if not weeks, away from any deal with the fund, leaving consumers to get by.

“When I went out to get some summer outfits for my children, most of the stores displayed very basic items as well as different winter clothes,” said Umm Laila.

The mother of three, who asked not to use her full name for safety reasons, said a sales representative at a store in a Cairo shopping mall blamed it on inventories that are running low and told her that winter clothing had to fill the void.

“I couldn’t believe my eyes,” she said.